CENTRAL COSTA RICA: WHEN THE TUNA ARE IN TIGHT 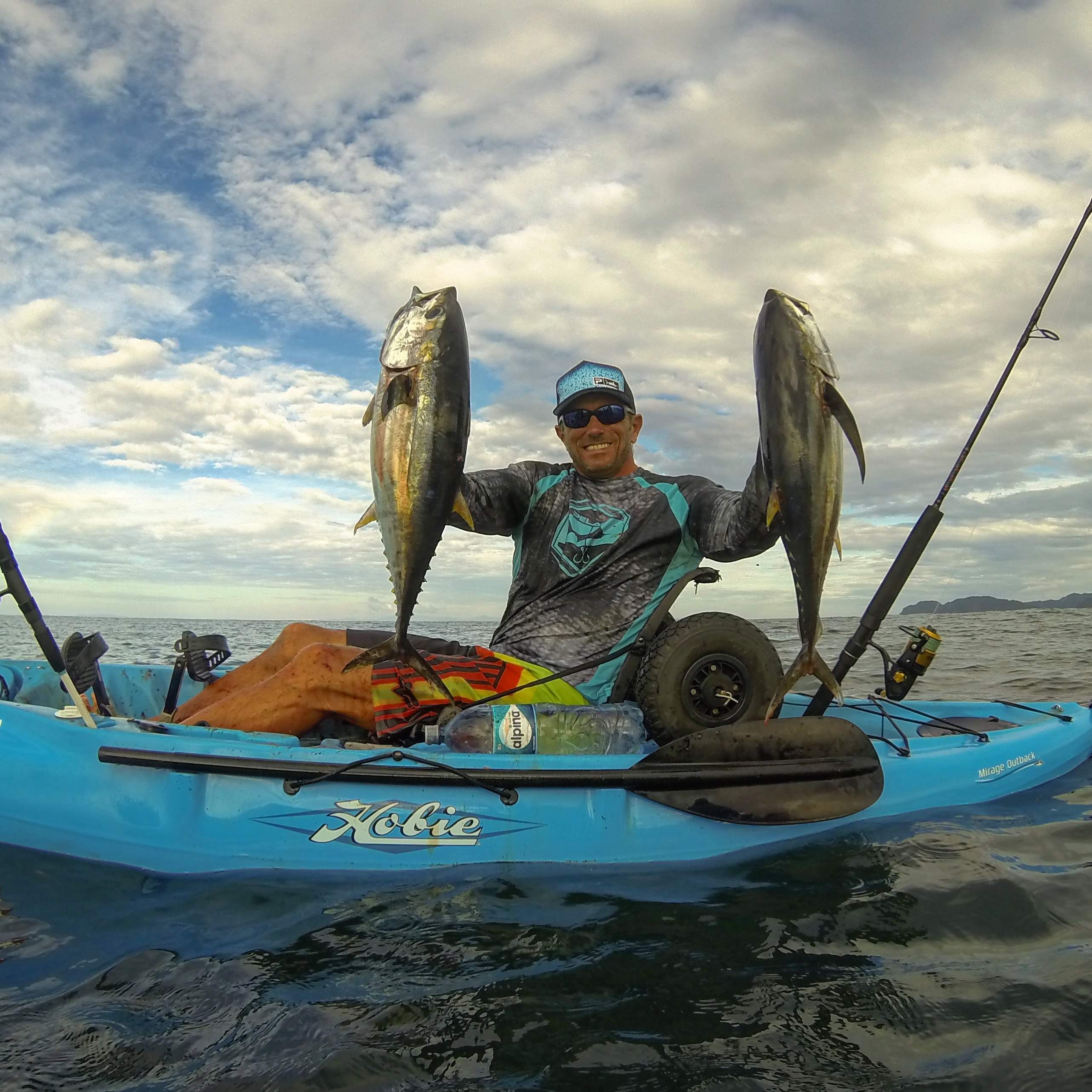 Everyone loves a good tuna bite! There’s just not many things more exciting than pulling up on a big active school of fish and watching the surface boiling. Spinner dolphins jumping, yellowﬁn busting and God-only-knows what kind of sea monsters lurking underneath. Honestly, it’s one of the most exciting moments I get to experience as a ﬁsherman. My heart rate goes up instantly and I can hear that brake screaming in my mind before I ever even get a line in the water. I think the only thing that might be even better is pulling up on that scene in a kayak. It’s a total adrenaline rush! 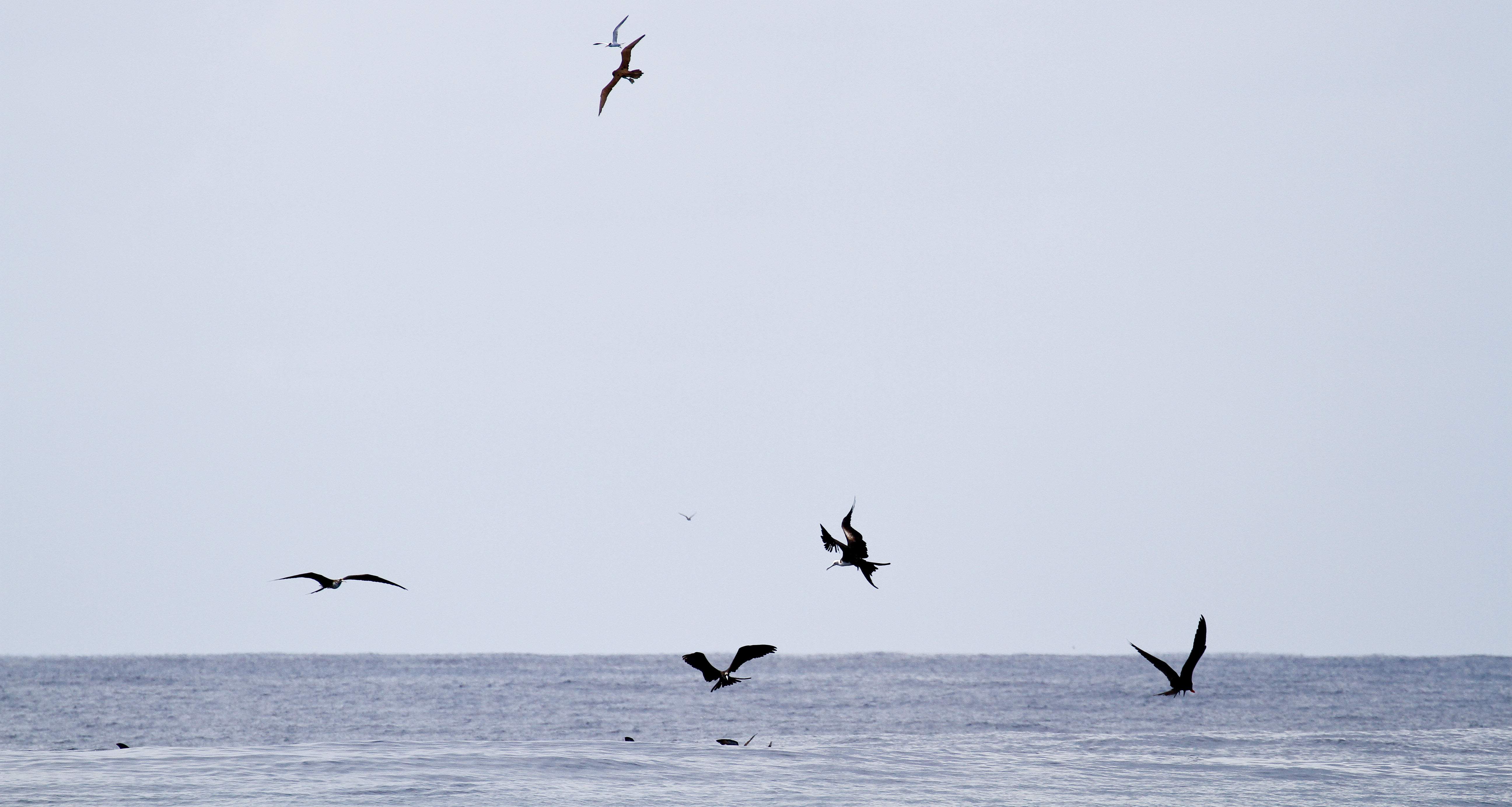 [Surfacing feeding birds are a tell-tale sign of where the tuna are. || photo by Steve Dougherty]

Unfortunately, it can be a rarity for a kayak angler depending on where you live. I know some guys are fortunate enough to be just a quick paddle away from the tuna, but not so much here on the Central Paciﬁc coast of Costa Rica. We’ve got plenty of tuna, but typically you’re going to have to crank up and get 20+ miles out there to ﬁnd them. But there are exceptions to every rule and 2016 was a big, fat sushi-grade exception. 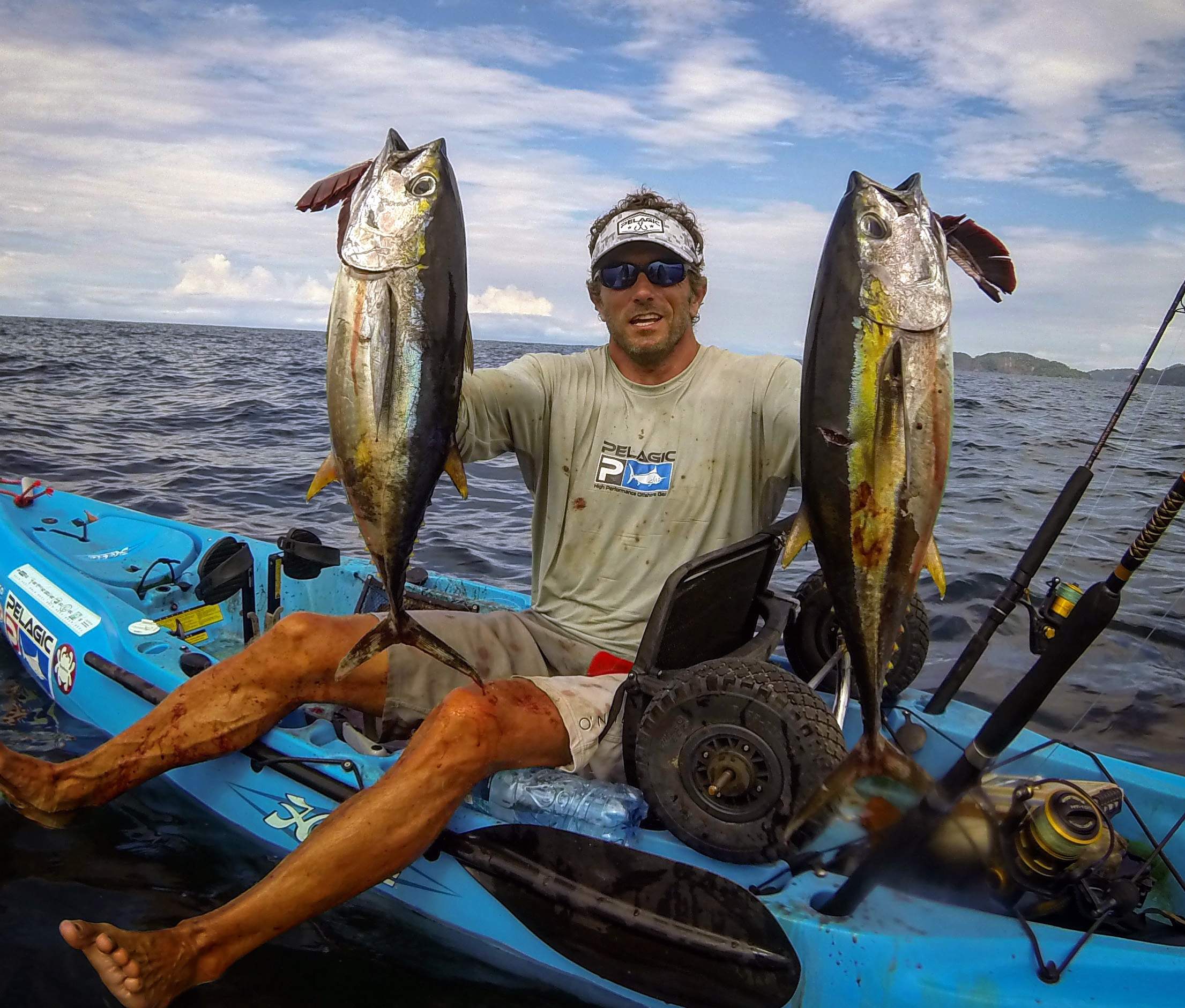 [Fighting tuna is a blast in anyone's book, but sticking fish from the kayak is true adrenaline rush.]

I ﬁrst found them out in front of my local spot in September of 2016. I was about two kilometers out jigging one of my snapper holes when I saw the Frigates going nuts about another kilometer out, so I cranked in the jigs and bee-lined it for the horizon. As soon as I got within a couple hundred yards I saw the tuna busting the surface and it was instant action. I picked off several that day and those were my ﬁrst tuna ever from the kayak. I was grinning from ear to ear and giggling like a crazy man the whole way in! 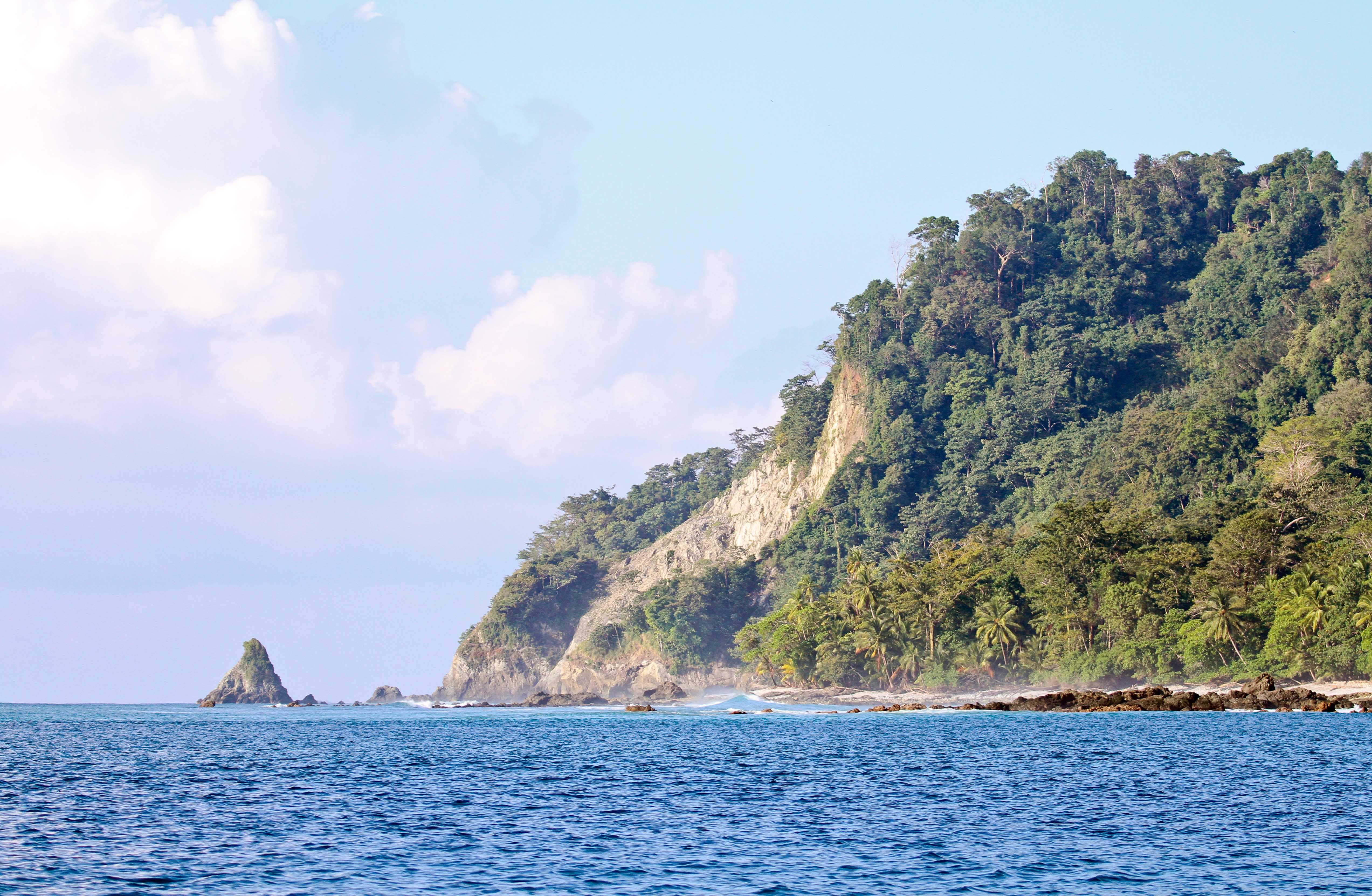 [Inshore fishing for snapper, roosters and more can be phenomenal, but finding schools of tuna just a mile or two off the beach is in a class of it's own. || photo by Steve Dougherty]

I knew I was very fortunate to stumble across that action and I knew it could be a very long time before that happened again. And then….it happened again the next day. And again a couple of days later. A month later I was still catching them. November and December – still there. It was absolutely amazing. The tuna would be hanging within 500 meters of the same spot every day. It was almost like having my own private tuna ﬁshery out in front of my house. I say private because there were exactly ZERO other boats out there for the entire four months. I even started playing with different lures and presentations and I couldn’t ﬁnd a lure in my box that they wouldn't eat. One of my favorite techniques was easing up on them in the kayak and casting a Gypsylures Flutter Jig into the middle of them. If I could get it into the middle of the action they would hit it on the drop every time. Most of them were big footballs and none went more than 20 lbs. but man, when you’re catching fresh tuna from a kayak in front of your house every day it’s kind of hard to complain. 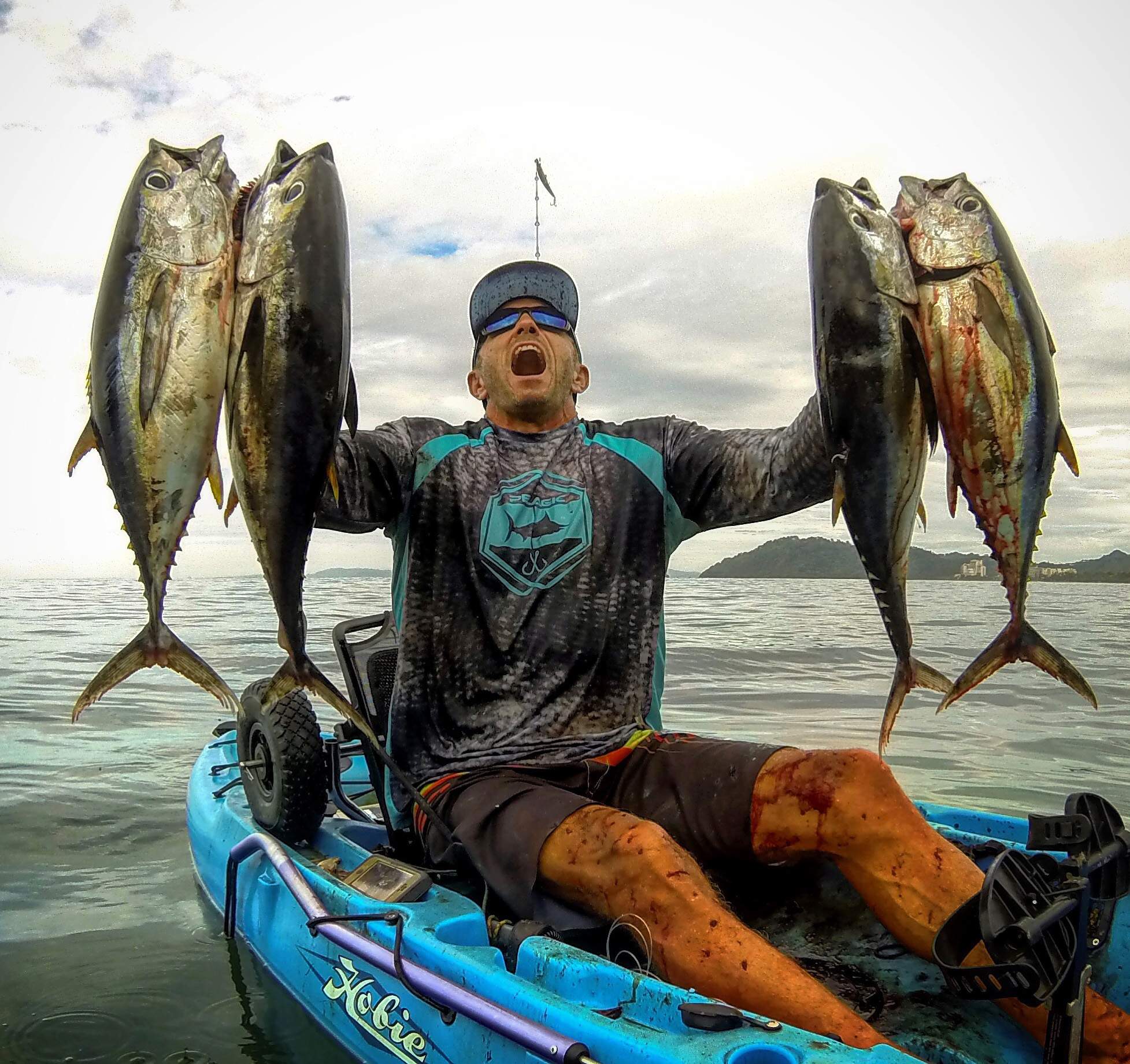 [The author feeling the pure stoke of a wide open tuna bite.]

Overall, 2016 was the best inshore season I have ever seen down here [Jaco, Costa Rica]. I had a record year on both roosterfish and Cubera snapper, but that late season tuna bite was icing on the cake. Hell, it was a whole new cake! I’m trying to take it for what it was and not have big expectations for next season. I have never seen them in that tight before and I may never see it again. But you can rest assured that I’ll be looking!