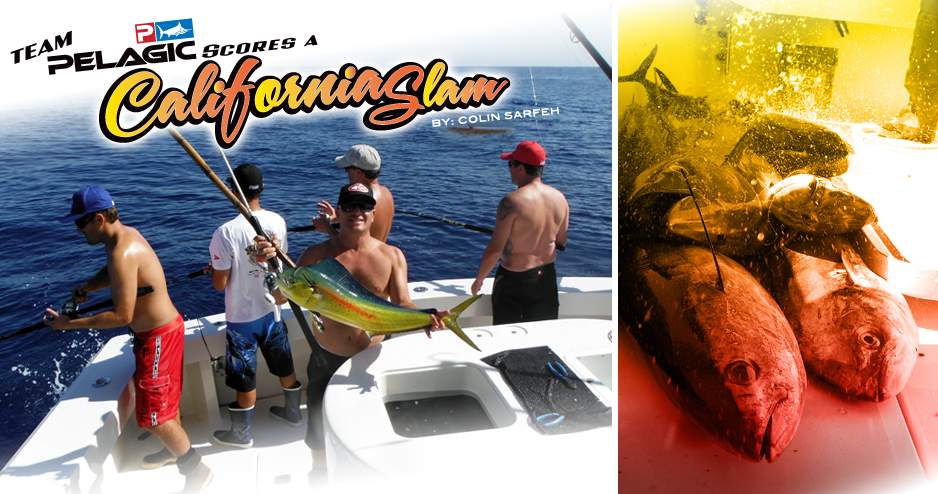 Southern California fishermen haven’t had much to get excited about in a long time. For the past five years or so, fishing has been, well, abysmal to say the least. The Yellowfin and Bluefin Tuna schools never stacked up (or they were too spooked from seiners chasing them), the Albacore basically just passed us by, and the local yellowtail bite never seemed to materialize.

This year, however, is a different story. All signs are pointing to an elongated fishing season for southland anglers. The water is warm – check. The marine layer has vanished – check. And more and more fish continue to show up in waters reachable by any viable SoCal vessel – check, check, check! The excitement is in the air, and locals are taking advantage of this banner season offshore.

With the action hot in both California and waters south of the border in Mexico, Team Pelagic simply had to see what the hubbub was all about. A quick call was all it took and we were on our way to San Diego to meet up with up Christian Fanticola and his crew, and hop aboard his 58’ Viking, Pesca de Oro .

Leaving on a Wednesday night would put us in line to fishing at a 70-100 mile range from San Diego into Mexican waters, where we would start trolling while looking for kelp paddies and signs of life in this fruitful offshore zone.

Below: Pesca de Oro logo // The sun rises over a flat calm Pacific 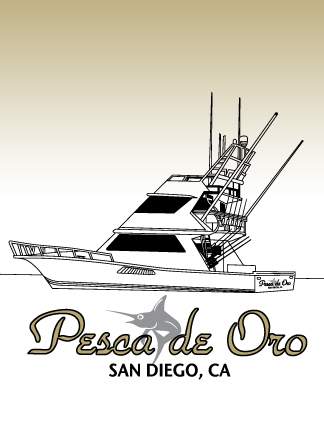 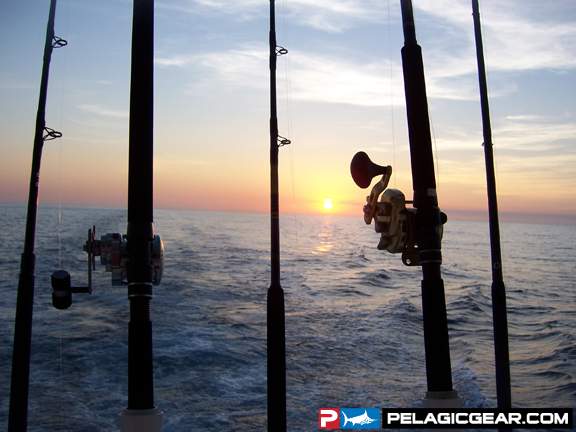 We woke up to basically flat calm seas and perfect weather – something California anglers have not been graced with often when fishing offshore for basically the past five years. With the presented conditions, it made spotting kelp paddies extremely easy; if they were out there, we were going to find them.

Our main objective for the day was to find that “bingo” paddy that would be holding yellowtail and dorado close to the floater, with yellowfin tuna balled up deep that would join the party once drifting a little further off the mark. We were not disappointed – and encountered a few surprises along the way…

The sun rose over a flat calm Pacific Ocean, and we began spanning the horizon for the floating fish motels. It didn’t take long to find what we were looking for, and we soon encountered our first surprise – more so, a spectacle all SoCal anglers have been waiting to see for years.

As Captain David “Wolfie” Wolfson rolled up to our first paddy, his meter lit up with giant “blips”. He shut down the motors and came screaming out of his wheelhouse, “Brail the bait! Throw heavy gear! This is the real deal boys!”

Below: Kelp paddy - a floating fish hotel // Bluefin Tuna light up the sonar 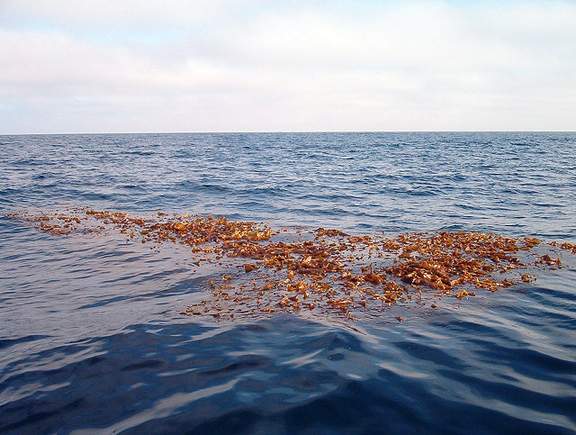 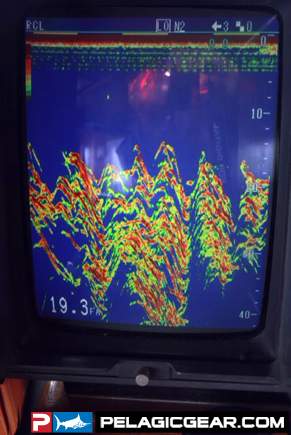 Soon after the boat shut down, 100-plus-pound Bluefin Tuna started crashing all around the boat, and for a brief minute, there was chaos…and just as fast as the fish came up, it was done. We did have one hook-up on too light of tackle and the fish spooled the reel in a matter of seconds. The school sunk out and would not be found again – typical of finicky Pacific Bluefin schools. But, that’s the name of the game with local tuna fishing, and we were not going to let it get us down.

Wolfie repositioned us up-swell of the original paddy we had spotted before the Bluefin fiasco, and found it to be completely corroded with Yellowtail and Dorado – some of which had some size to them. Any bait or iron jig that hit the water was bit immediately – we managed to weed through many small models and kept a nice batch of fish before moving on.

Below: A few nice Dorado taken off our first paddy 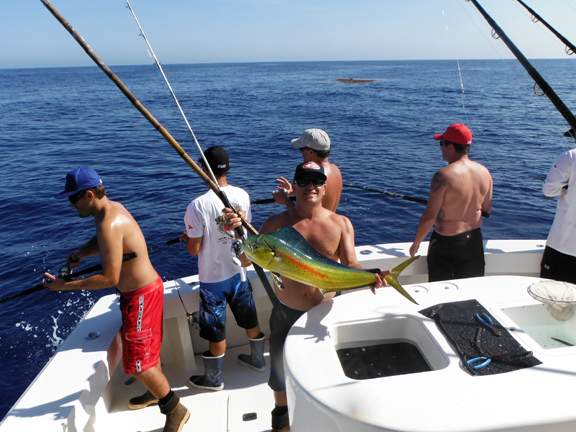 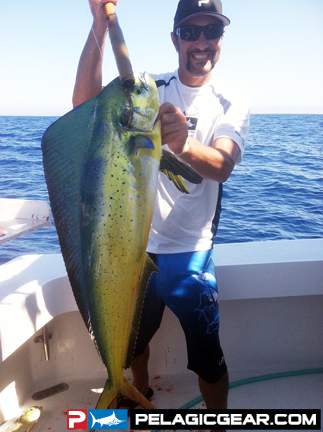 The next paddy was spotted a few minutes after cruising away from the first one. The jumbo kelp mat looked to be a good one and had four or five birds sitting on top of it – a great sign. The first biters were more Yellowtail and Dorado; however, after drifting a hundred or so yards off the paddy, Yellowfin Tuna started showing up. There were boiling fish and “free swimmers” everywhere and the tuna stuck with the boat for a little over an hour. These fish were suicidal, biting baits not more than a few feet off the stern of Pesca de Oro . Everyone pulled on quite a few before we decided to reserve our bait for the next location. 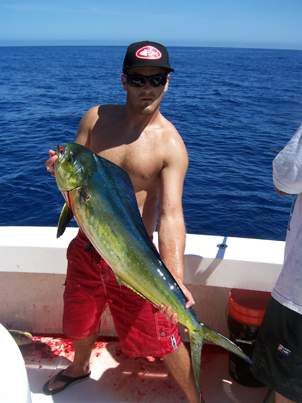 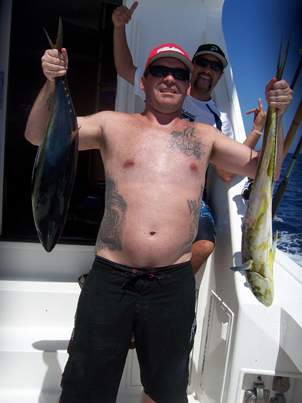 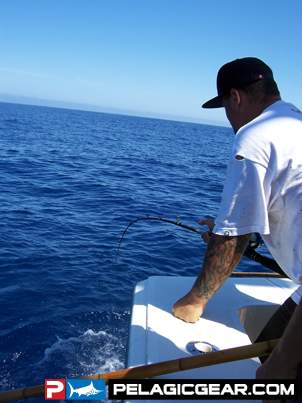 The day continued with steady action on more Yellowfin Tuna, Dorado, and Yellowtail in perfect offshore weather. Around mid-afternoon we got a few more surprises, as Captain Wolfson and Bill Nance found themselves simultaneously hooked into what seemed to be a better grade of fish. Wolfie soon boated a gorgeous 32-pound Bluefin Tuna, while Bill continued to wage battle in a stern corner. This fish fought hard, coming close enough at deep color before shooting down into the depths again. Ten-minutes later, Bill prevailed and we had our second solid Bluefin on board – a hefty 40-pound fish.

Below: Wolfie and Bill Nance with their Bluefin Tuna 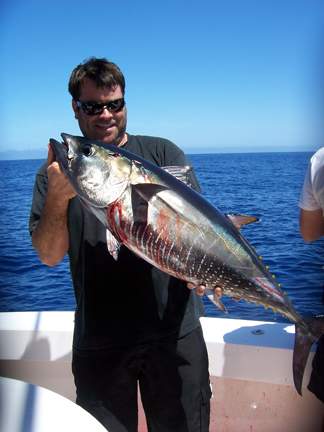 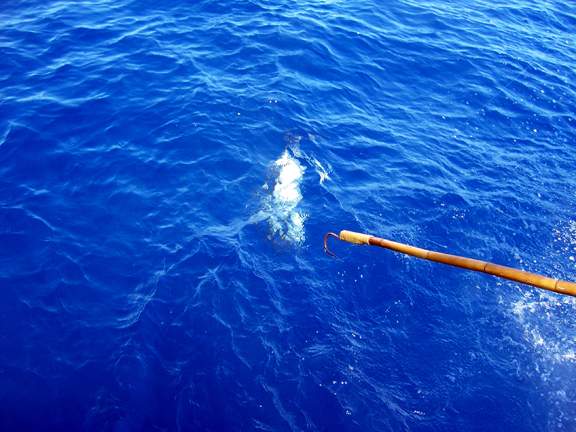 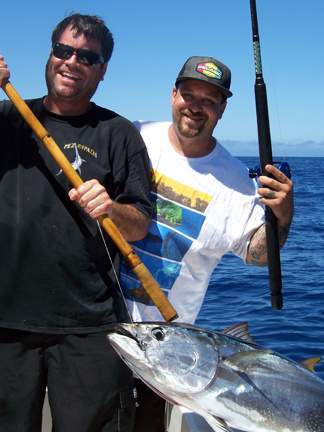 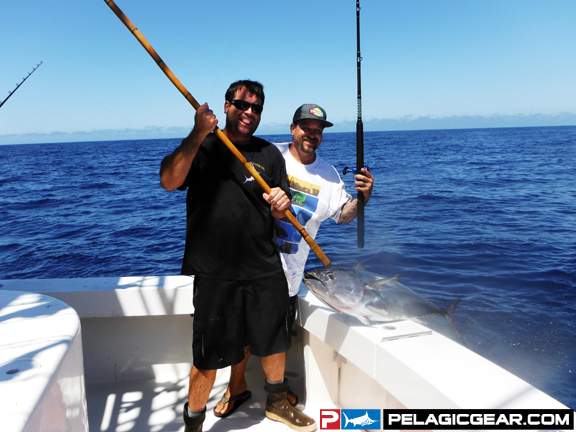 It was on the last paddy of the day, where we finished off our California slam. Fishing off the bow, Colin Sarfeh soaked a sardine far upswell and away from Pesca de Oro when his bait was annihilated. As the line came tight, Colin could tell it was a better grade fish. Figuring that it was another one of those solid 30-40 pound Bluefin we had caught earlier, Colin settled into a battle up on the bow. As the fish came to color someone shouted, “ALBACORE!”

Sure enough, the longfin had its wings spread as it came to gaff and it was high-fives all around when the 30-pound albie hit the decks.

Below: Completing the slam with an Albacore // The mark of a successful outing 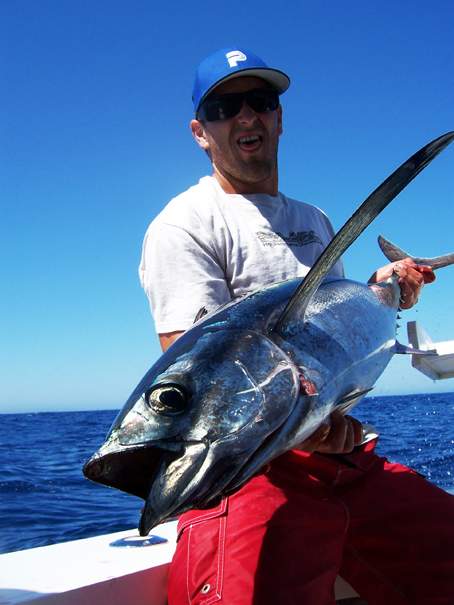 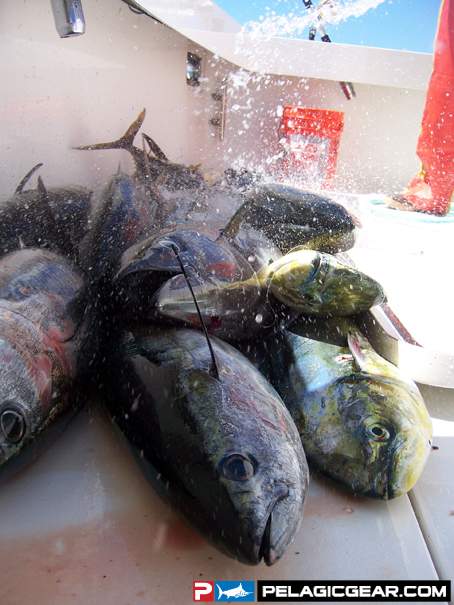 With that fish on ice in the holds, that gave us five different species for the trip – Dorado, Yellowtail, Bluefin Tuna, Yellowfin Tuna, and Albacore – something none of us on board could remember being a part of so close to home in at least five years, if not more. What a day!