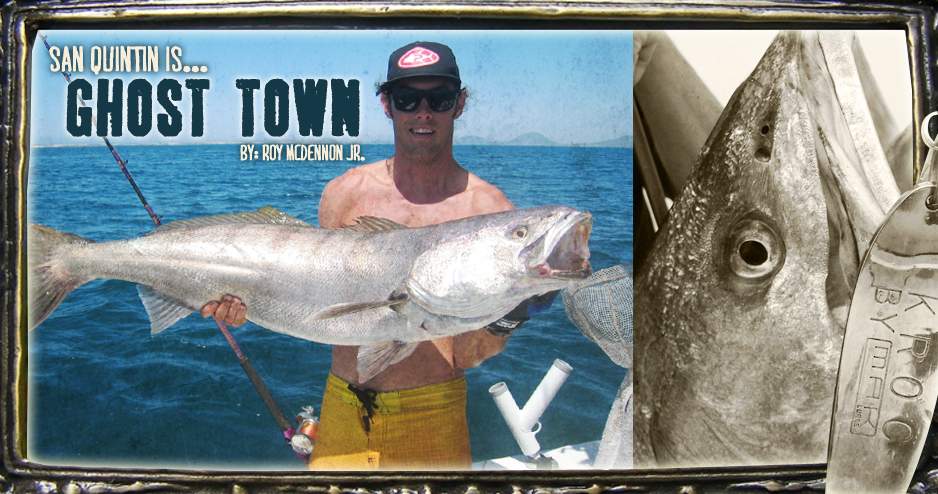 Well I just returned from an epic trip down to San Quintin, Baja Mexico, and wanted to give you an update on the action. I had the chance to run down there for a couple weeks and fish with my father and some friends and the fish sure didn’t disappoint! Just as the SoCal scene has finally made it back on track with the gamefish this season, the San Quintin area has been on fire as well.

With its close proximity to the US border, San Quintin has been a long time favorite for traveling anglers on the west coast wishing to target many of the same native species found in California, but in many cases, in bigger and better proportions. One of the largest attractions to this small ranching town by the sea is the insane white seabass fishery that comes to life in the late summer/early fall months, and this year its back in full swing!

Below: The main attraction at Ghost Town - White Sea Bass 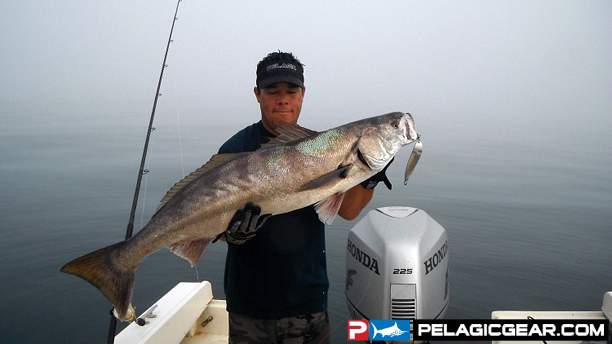 Like usual, the Ghosts have shown up all over the coast this season, including many of the local kelp beds – but, on this trip we chose to target the seabass congregating over the sand just outside the mouth of the San Quintin Bay. The fish move out onto the flats to gorge themselves on the large concentrations of finbait, a mix between anchovies, mackerel, and sardines that are balled up in the area. This is our favorite place to fish the finicky croaker, as the angler is able to fish lighter line and have a better hook –to-land ratio without the worry of loosing fish to the kelp.

One of the go-to methods for enticing these large Mexican seabass includes the use of a krocodile, a chrome spoon-type lure with a single treble hook at the bottom. Often thought of as a kooky jig that most SoCal fishermen might save for sandbass or have rusting at the bottom of a tackle box, when casted, jigged, or paired with a live bait slow trolled behind the boat, these lures are dynamite for big seabass in SQ.

Below: Big "ghosts" like these are especially susceptible to a large, metallic Krocodile Lure tipped with a live mackerel 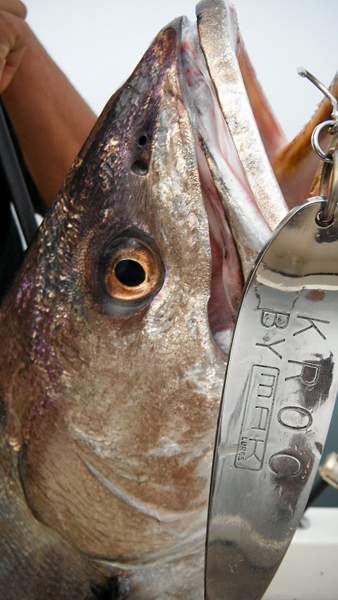 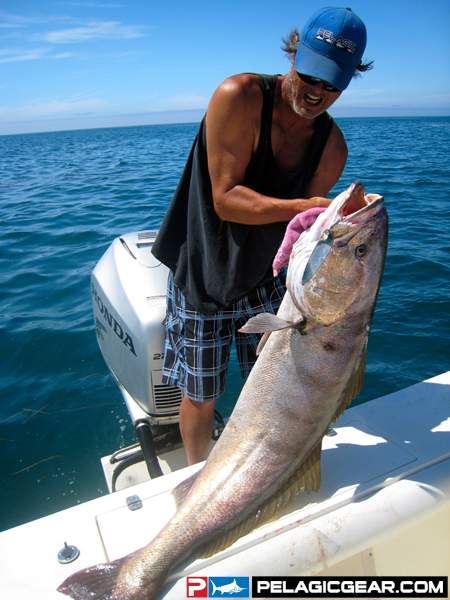 Most mornings we’d launch a couple hours before the high tide and navigate through the shallow channel while metering and searching for signs of bait to catch for the tank. This year the large mass of bait in the bay has not been present like years past, so most of our bait catching took place outside of the mouth, just past the sandbar that stretches across the bay’s entire entrance. We did best with the “Run & Gun,” approach, chasing bird piles and bait balls on the surface then dropping a live mackerel pinned to a large krocodile down while one of us would fire a smaller kroc into the baitball and give a steady retrieve on the surface. We hooked more fish on the cast, but found the bigger seabass were consistently caught on the larger jigs with a live bait attached fished in the upper water column. The combination of the shiny chrome flashing of the kroc and the sporadic movements of the mackerel create an irresistible treat.

Below: Other exotics, like Mahi Mahi (right) and brute CA Yellowtail, are found around San Quintin as well. 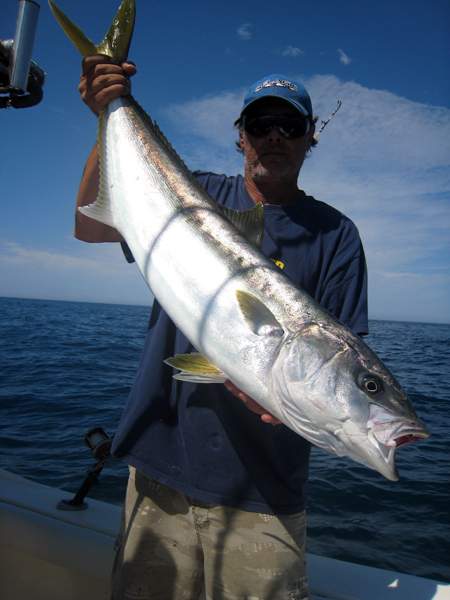 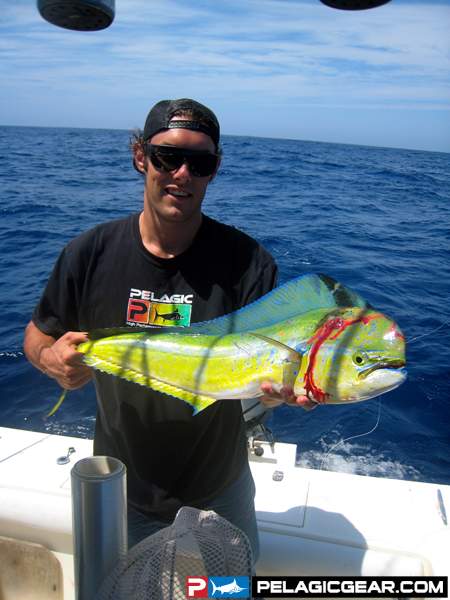 Throughout the trip we had a few great days on the water inshore and offshore. The yellowfin tuna were a close 13nm off the beach and all of the high spots were loaded with nice grade yellowtail. We spent a couple days chasing pelagics, but focused most of our time on the big seabass and we were rewarded. My father landed his personal best with a 61lb slug that bit a Kroc/Mack combo and we caught many others in the 25-50lb range. Most of the other boats in the fleet have been in on the action as well so 60+lb whites have been nothing but a regular sight down at the fillet tables by the ramp.

Below: Its why they call SQ "Ghost Town" folks - Giant White Sea Bass like the 61 and 68 pounders shown here are the trademark of the San Quintin fishery 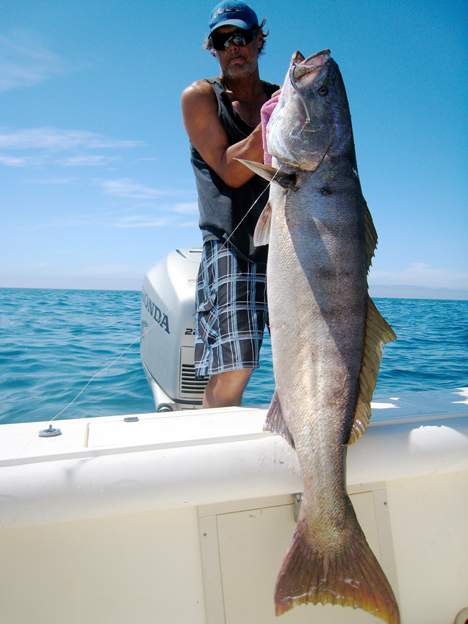 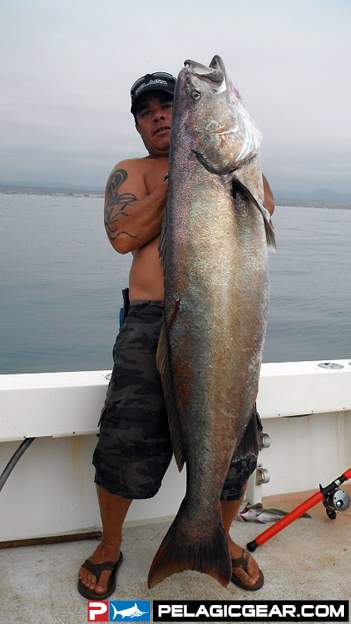 The bite hasn’t stopped since we left as I keep hearing reports and seeing photos of tanker ghosts being caught almost everyday. If you find the opportunity to get down and fish San Quintin soon, jump on it and see what northern Baja’s best white seabass fishery has to offer!