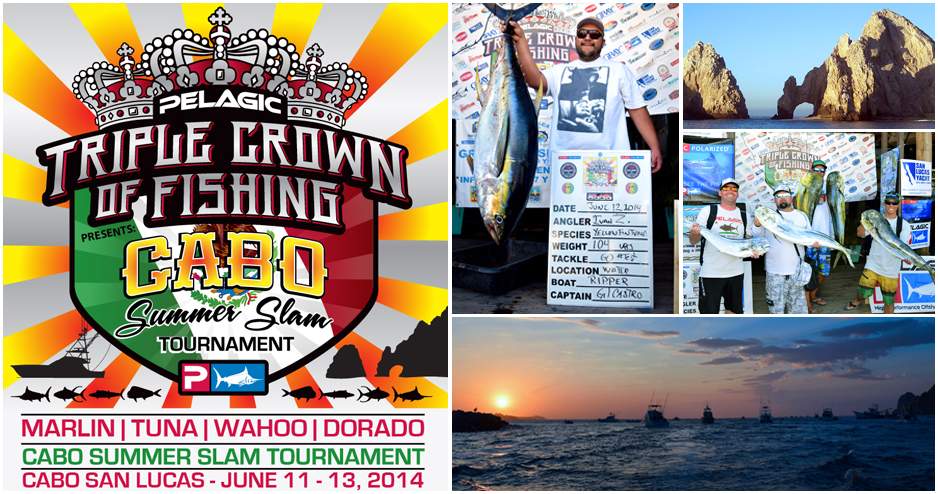 Midmorning of the first day of the 2014 Cabo Summer Slam presented by Pelagic was greeted by applause and adulation by the entire nation of Mexico. While it may be true that most of the cheering and fiesta was in response to Mexico’s victory over Cameroon in the opening round of the World Cup, there were 26 teams of anglers whose eyes were glued not to Brazil, but to the spread.

MC’ed by San Lucas Yachts’ venerable Captain, Tony Berkowitz, the tournament was permeated with Cabo San Lucas hospitality and flair. The Registration Party kicked the tournament off in style. While signing up, confirming details, and listening to the rules, teams were greeted by an open bar at Baja Cantina in Marina Cabo San Lucas, and a comprehensive raffle line up of Pelagic Polarized Sunglasses, enough bottles of Ballast Point’s Three Sheets Rum to make the whole gathering “borracho”, Custom Seeker Rods, Penn Reels, Seaguar Fluorocarbon, Pro Soft Lures, Troll Pro, and lots of Pelagic Gear. With the rules and introductions in the bag, it was time to get to the fishing.

Day one started at 6:30 am with a shotgun start out of the Marina and past the arch. The Port Captain of Cabo San Lucas joined Pelagic’s Tony Berkowitz and Elliott Stark with an escort by the Mexican Navy. Cabo San Lucas knows how to party.

The tournament awarded daily jackpots for billfish release and for largest gamefish. Day one brought a fast start by Team Picante 45 with Captain Nino Romero and mate William Cesena. Team members Evan Salvay, and Steve and Anne Murphy took the billfish daily as well as the day one billfish lead by turning loose five striped marlin. In the Gamefish Division, it was Team Sneak Attack that took an impressive early lead. Junior angler, Ret Torkelson, snuck up on a 58-pound wahoo. The blue-striped missile remained in the top spot until Team Ripper ‘s Ivan Zancudio turned in a 104-pound yellowfin. This hefty tuna took the gamefish daily jackpot for day one and remained unbeaten after day two garner Team Ripper top Gamefish honors in the tournament, as well as a new Penn 50TW reel. 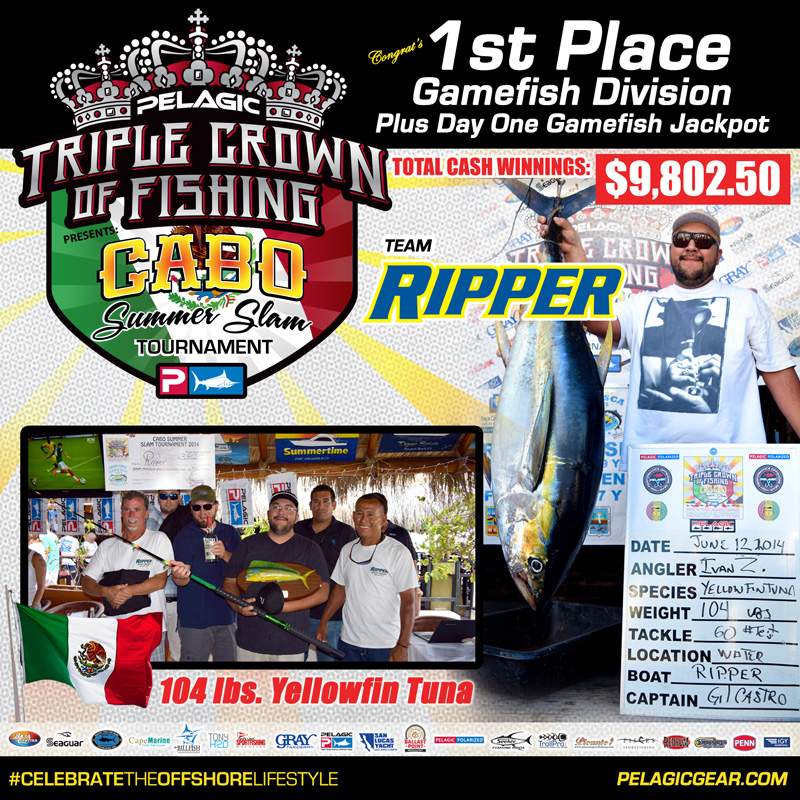 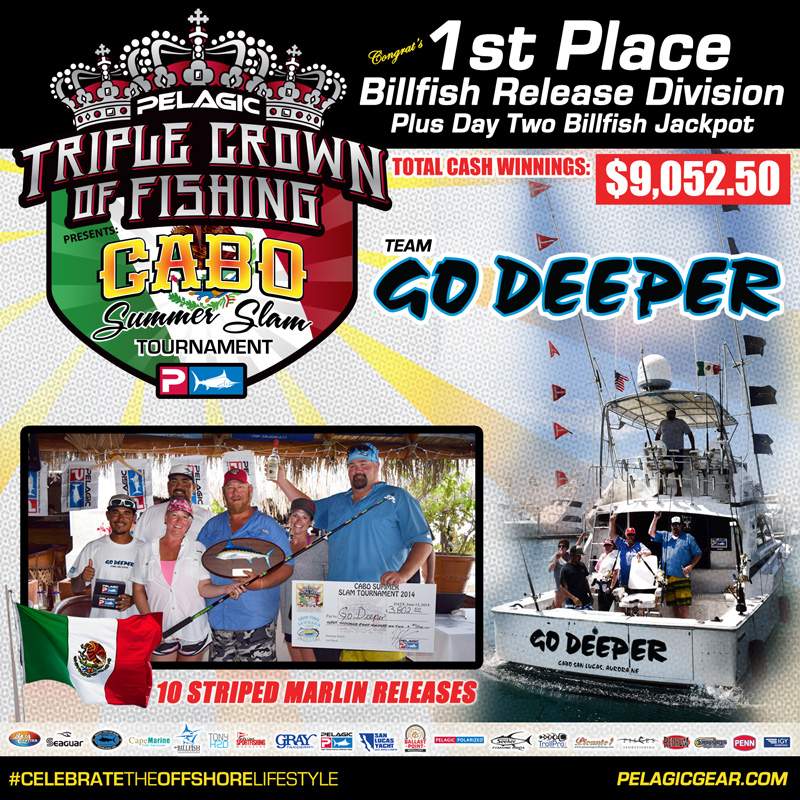 The second day’s gamefish category was dominated by Team Bob Marlin ’s 89-pound yellowfin tuna. The tuna earned the team a $6,000 pay day in the form of the daily gamefish jackpot.

With the tournament wrapped up, it was time for the awards ceremony – and, you guessed it… another open bar at Baja Cantina. The Billfish Foundation presented memberships to Team Go Deeper for being top billfish release team. While several bottles of Ballast Point’s Three Sheets Rum were awarded during the ceremony, I am not sure that any of them made it intact through the night (See photo gallery below…). Pelagic gave away several custom embroidered Hurricane Jackets to winners. Check presentations culminated the event as “dinero” and trophies donated by Gray Taxidermy were awarded to all the winners.

With the raffles and participant bags everyone went home with more than they brought, but here’s a recap of those making a trip to the bank:

The combination of a Pelagic fishing event and Cabo San Lucas, Mexico touched on something approaching magical. While the fishing didn’t set any records, the tournament was a great event. Thanks to all the participants and sponsors. If you couldn’t make it this time, think about putting the next Pelagic tournament in Cabo on your list. After all, this really can’t be a bad idea…

We would like to give a special thanks to all of our fine sponsors who graciously supported this inaugural event. With your help, we plan to make this tournament a mainstay annually in beautiful Cabo San Lucas!