Halibut: The Flatfish Monsters of the Sea! 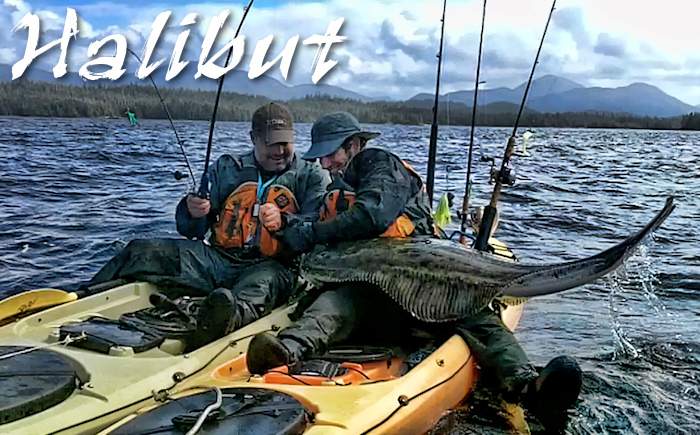 There is a certain fascination with anglers when it comes to deep dropping (or jigging) for flatty monsters, ie Halibut . Bouncing baits or lures off the bottom and then suddenly hooking into a slab that feels more like an anchor has tested the limits of angler's tackle, mentality, and physicality. Yet, these back-breaking beast attract sportfishermen from around the world to test their luck in Alaskan waters.

There are several different species of Halibut found around the world. The giant Atlantic Halibut has been overfished for the past century and is nearly endangered. The smaller California Halibut provides west-coast anglers with some tactical action on light tackle. And then there is the Pacific Halibut which is the west-coast's version of the Atlantic Halibut. The Pacific halibut is found on the continental shelf of the North Pacific Ocean and Bering sea. They are demersal, living on or near the bottom. The halibut is among the largest bony fish in the world. Halibut are strong swimmers and are able to migrate long distances. Their size is age and sex-specific, but also follows a cycle that has been related to halibut and other species abundance.

Pacific halibut have diamond-shaped bodies and have both eyes on their dark or upper side. The color adaption allows halibut to avoid detection from both prey and predator. Being strong swimmers, halibut are able to eat a large variety of fishes such as cod, turbot, pollock, and some invertebrates such as crab and shrimp. Most spawning takes place off the edge of the continental shelf in deep waters about 1,200 to 1,800 ft. At six months of age, the young have their adult form and are about 1.4 inches long. Young halibut, up to 10 years of age, are highly migratory. Older, reproductively mature halibut move seasonally across areas and between shallower and deeper waters during and around the winter reproductive season. The oldest halibut on record (both males and females) are 55 years old based on otolith (aka ear bone) measurements.

There is a thriving commercial fishery for Pacific halibut, mainly in Alaska but also along the western coast of North America south to Oregon . Sport fishing for halibut in Alaska is a very popular activity; it is a strong fighter with an impressive yield and firm, white flesh.

Below : Pelagic's Capt Andy Mezirow with a hellacious Halibut taken on jig 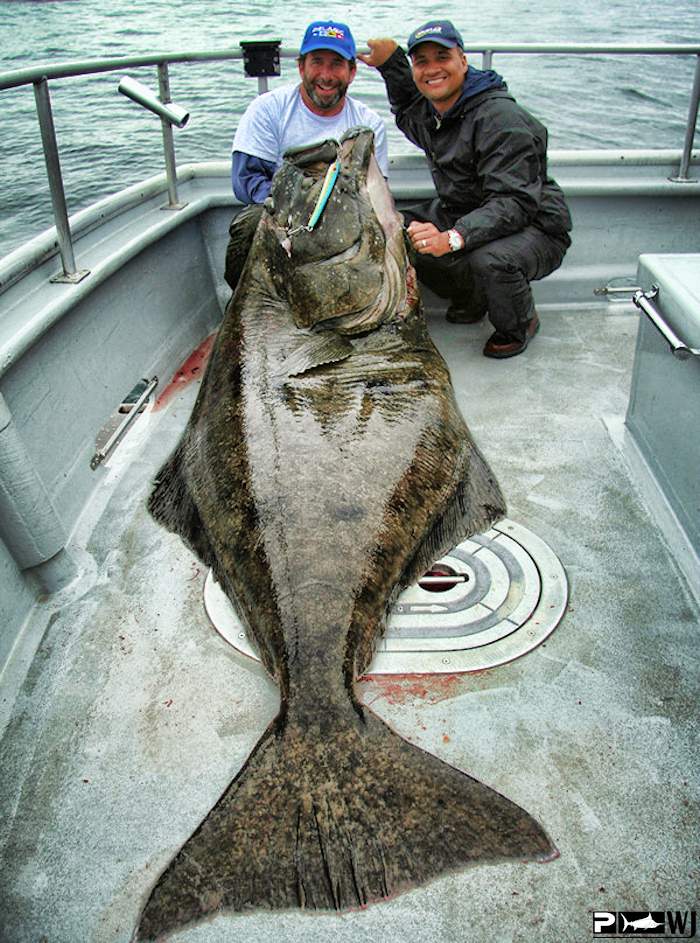 Pacific halibut have diamond-shaped bodies. They are more elongated than most flatfishes, the width being about 1/3 of the length. There is a high arch in the lateral line over the pectoral fin, and it has a lunate, or crescent shaped tail, which is different from other flat fishes. Small scales are embedded in the skin. Halibut have both eyes on their dark or upper side. The color on the dark side varies, but tends to assume the coloration of the ocean bottom. The underside is lighter, appearing more like the sky from below. This color adaptation allows halibut to avoid detection by both prey and predator.

Fishing for the Pacific halibut is mostly concentrated in the Gulf of Alaska and the Bering Sea , off the West coast of Canada . Small halibut catches are reported in coastal Washington, Oregon, and California. Pacific halibut is broken up to ten regularity management areas.

Halibut are demersal, living on or near the bottom of the water and prefer water temperatures ranging from 37 to 46 degrees Fahrenheit. Pacific halibut belong to a family called Pleuronectidae. From November to March, mature halibut concentrate annually on spawning grounds along the edge of the continental shelf at depths from 600 to 1,499 feet.

Halibut of all ages and sizes are involved in a predominantly clockwise (Northwest to Southeast) migration from their settlement areas (Western part of the gulf of Alaska and Bering Sea), reproductive fish also make regular seasonal migrations from more shallow feeding grounds in summer to deeper spawning grounds in winter. Although halibut size is age and sex specific it also follows a cycle that has been related to halibut abundance. The average fish size seems to reflect density dependence in growth rate, where slower growth is associated with higher halibut (or other species) abundance, potentially due to less food available per fish.

Below : Bill Liston and friends have an amazing trip in Alaska Aug 2011 - Kayaking for Halibut 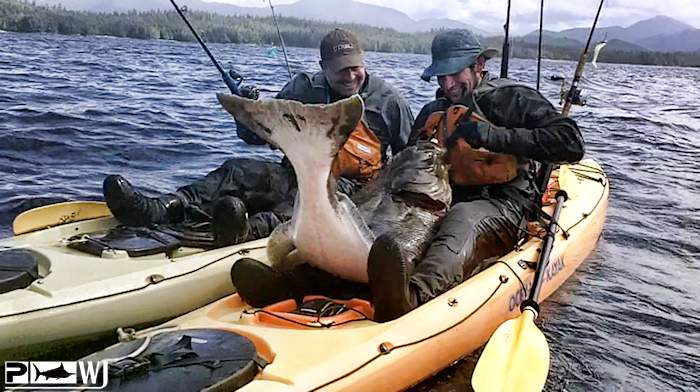 Sport fishing for halibut in Alaska is a very popular activity; it is a strong fighter and one of the world’s largest bony fish with an impressive yield and firm, white flesh . Over 65 percent of the effort and harvest occurs in K achemak Bay , Southeast Alaska , the Kodiak area, and near the mouth of Deep Creek in the Lower Cook Inlet .

Halibut taken by anglers are generally 15 to 20 pounds in weight; however, fish over 150 pounds are regularly caught. The current Alaska state record for a sport-caught halibut is 459 lb , and a fish must weigh at least 250 lb to qualify for the state’s trophy fish program. Anglers use stout saltwater gear to target halibut. Most anglers prefer to fish with bait, especially herring but also squid, octopus, cod pieces, or other small bottom fish. To get the bait down to the halibut, it is usually fished on a wire spreader or a sliding-sinker rig with sinker size 4 ounces to 4 pounds, depending on such factors as depth and current.

Halibut, along with salmon, provide substinence for several Pacific Coast native groups. Sportsmen’s effort and interest in catching these delicious fish is increasing each year. In Southeast Alaska, halibut are second only to king salmon in sport angler preference. Fishing for Pacific halibut is regulated by the International Pacific Halibut Commission . Members from the United States and Canada meet yearly to review research, check the progress of the commercial fishery, and make regulations for the next fishing season. The management of halibut fishing by this commission is intended to allow a sustainable yield of halibut.

As long these monster flat-fish are well managed by commercial and recreational anglers, then they shall continue to be among the top predators of the Pacific and among many sport fishermen's dream list.