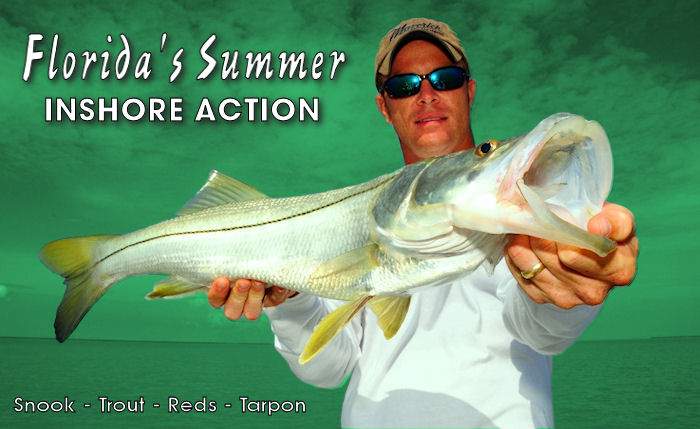 PELAGIC Pro Team Captain Benny Blanco checks back in with The Journal to to give insight and report on South Florida's inshore action already shaping up for the summer. Consistent catches of Snook, Redfish, Trout, and Tarpon all highlight the menu on the latest shallow water adventure.

Another great week rounds out a phenomenal month in Everglades National Park... with good numbers of Redfish and Snook on the flats, tons of Trout in every basin and pods of Tarpon cruising shorelines, you can take your pick or target them all! Summertime patterns are in full affect and once you get passed the mosquito welcoming committee, it's smooth sailing...

This week was filled with heavy West winds and sometimes cool rain, but the fish did not disappoint. We managed a couple Grand Slams, many Back Country Slams, a couple 20+ Redfish days and endless Trout. It was also another week filled with client' firsts... first Snook on fly, first Redfish on fly, first Redfish/Snook and first Tarpon. Rapala skitterwalks have been very reliable first thing in the morning or when dealing with high water. Five inch Gulp jerk shads in bright colors have worked well when Redfish are tentative eaters. Rapala Twitching Raps were big producers when fishing deep shorelines or flats. You can find all of the above at Don's Bait & Tackle in Homestead on the way into the Park.

Doc's Huckleberry...
Jeff ("Doc Holiday") May came to Flamingo with one goal on his mind, catch all four back country species and complete his first Grand Slam... my glasses were sometimes fogged by potent gases, but I kept my eye on the ball. We should have known it was going to be a good day when we were met at our first stop by several hundred schooling Snook... no lie. Each cast was met by a hungry Snook until they left us.

Next, we went in search of Tarpon and found several small pods... after a few intercepted attempts, Jeff puts one in the air and successfully lands his first Flamingo Tarpon. 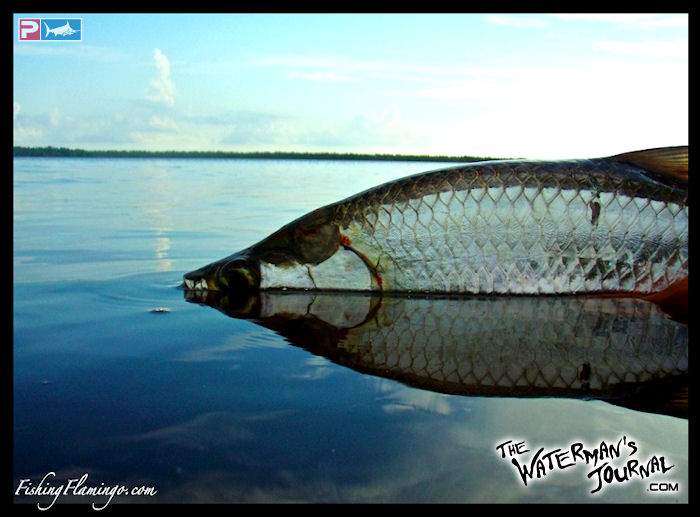 As the water slowly drained and the looming cloud cover finally cleared, the Redfish decided to show in grand fashion. We were literally covered in Redfish for nearly as far as you could see in every direction... and they were all active fish, crashing bait and tailing wildly. Jeff's first presentation to a school of Reds yielded a surprise... 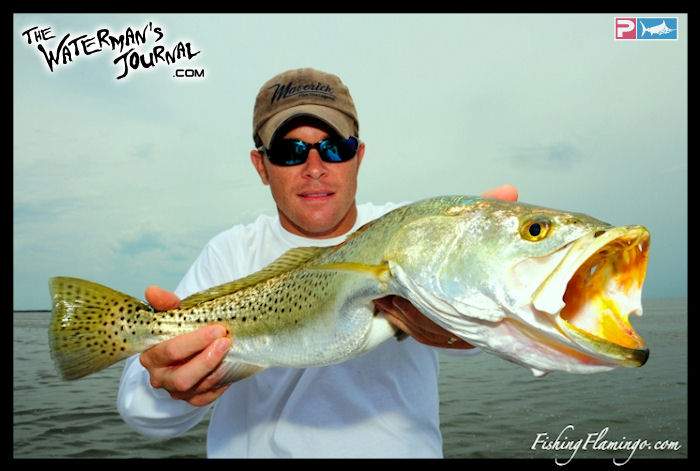 Then, it happened... Senor Redfish ate a perfectly placed presentation and the fight was on. It was a certified Flamingo lunker... not long at 31", but very fat fish nonetheless. 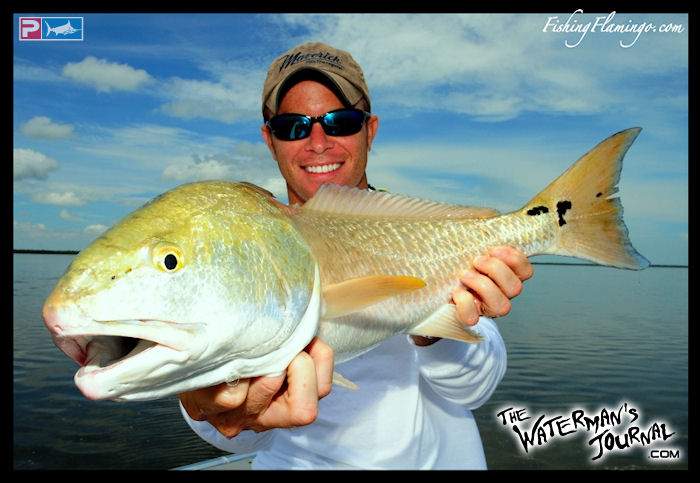 It was bonus time after that and we exercised many Redfish and Snook thereafter. I had a great time with Jeff... the jokes were plentiful and the gases were flowing. My cheeks still hurt from laughing all day. Thanks Jeff. 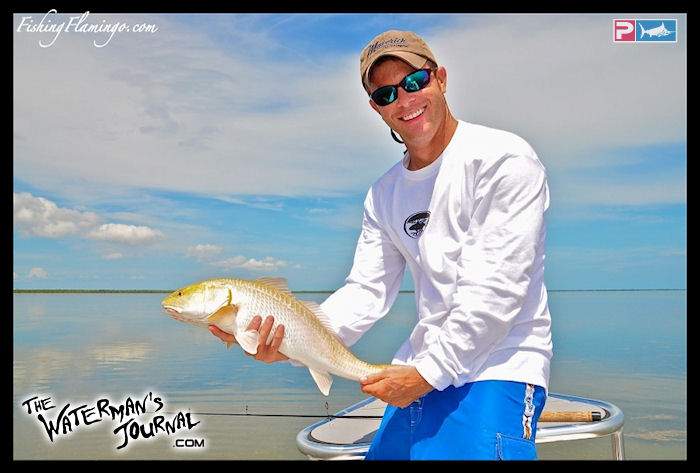 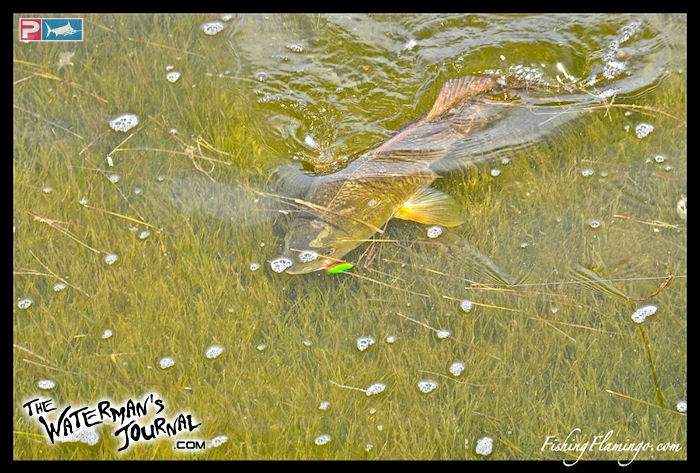 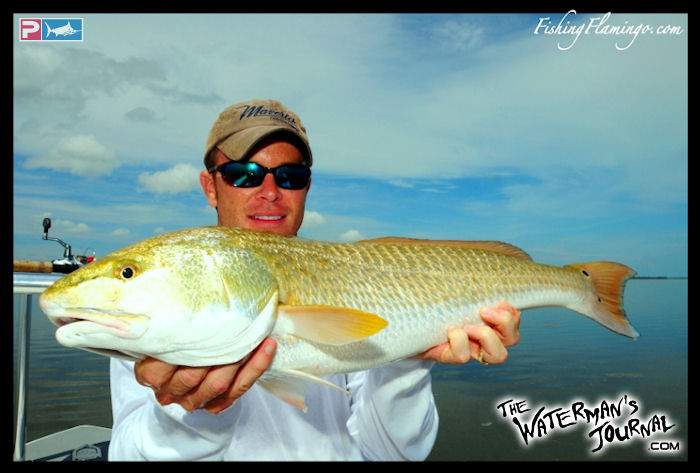 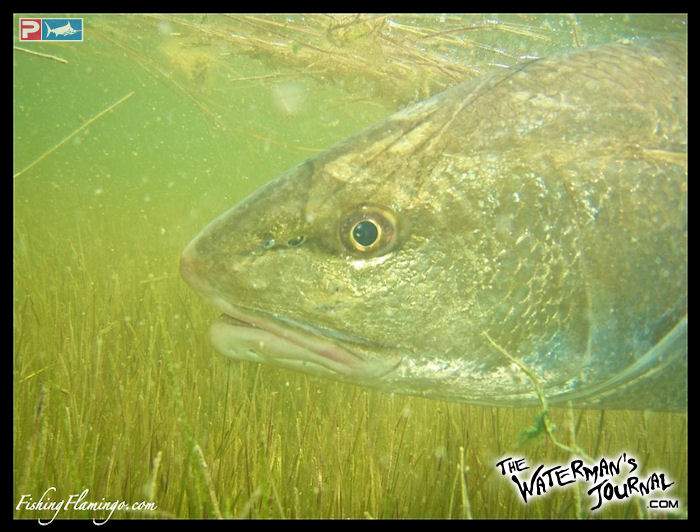 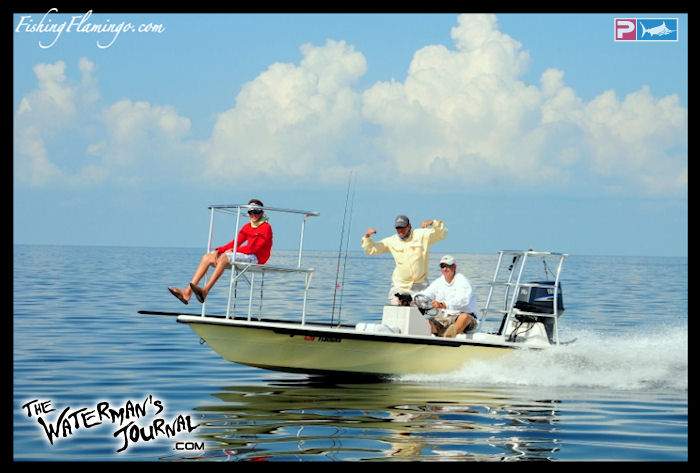 A special thanks to Kenny for more than managing second boat duties for a day with the boys from Florida Sportsman... Dueling T's ... it was a blast. 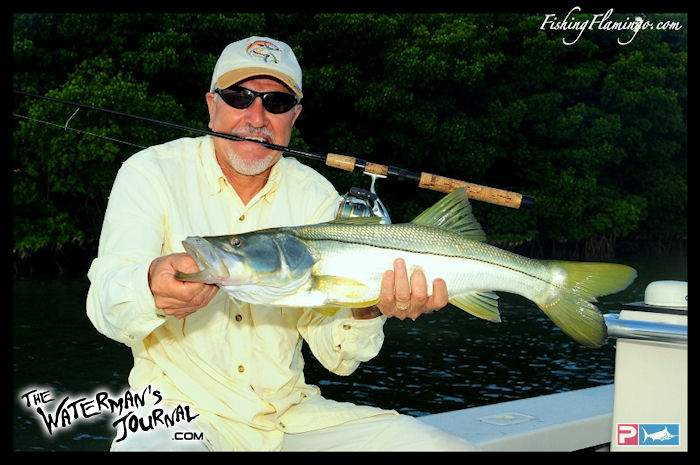 Lenny started his day off right with a nice Florida Bay Snook. 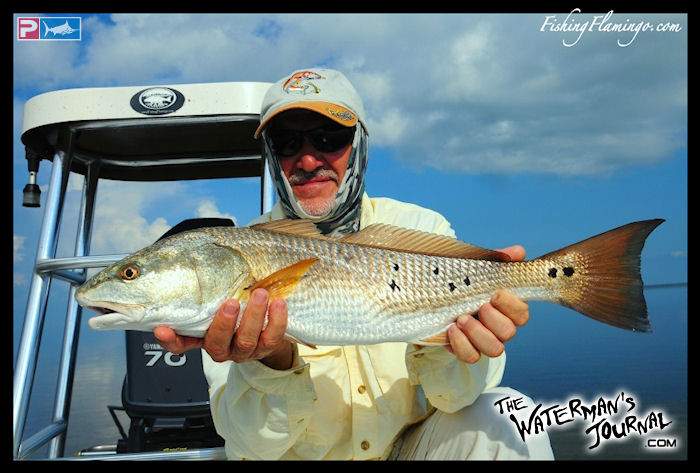 Then he proceeded to put a pounding on the Redfish... this was his first ever on the flats. 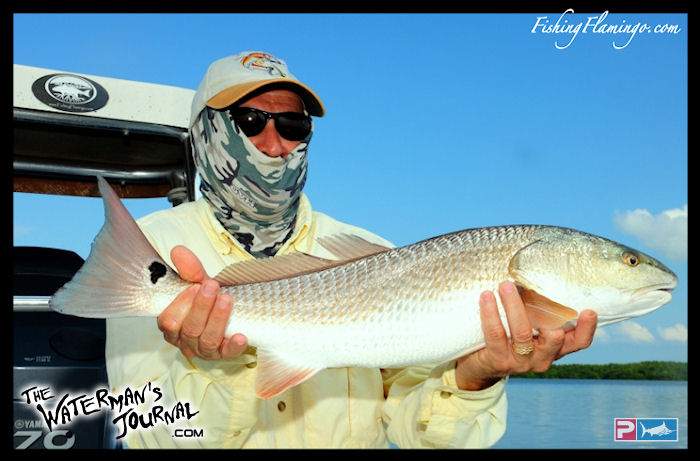 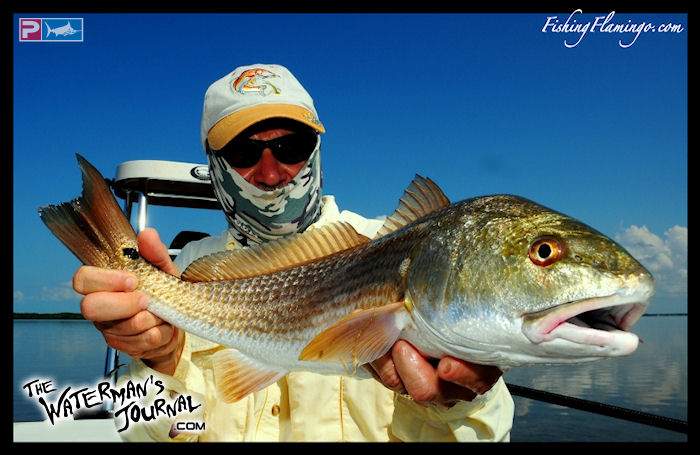 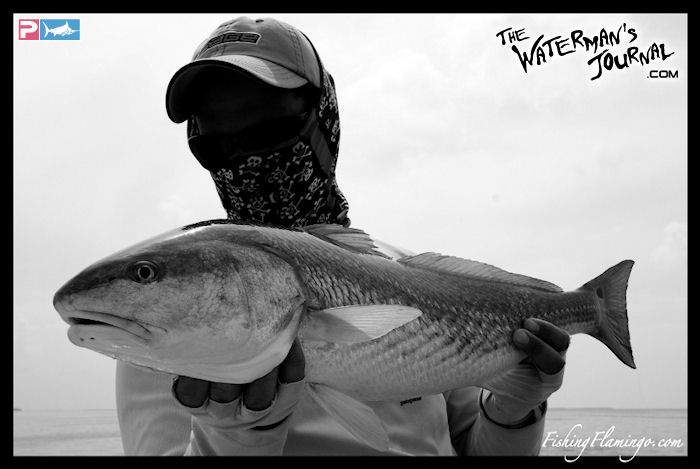 After logging his first Snook on fly, Charles worked through the tough 20+ kt West winds to find this hefty Redfish. 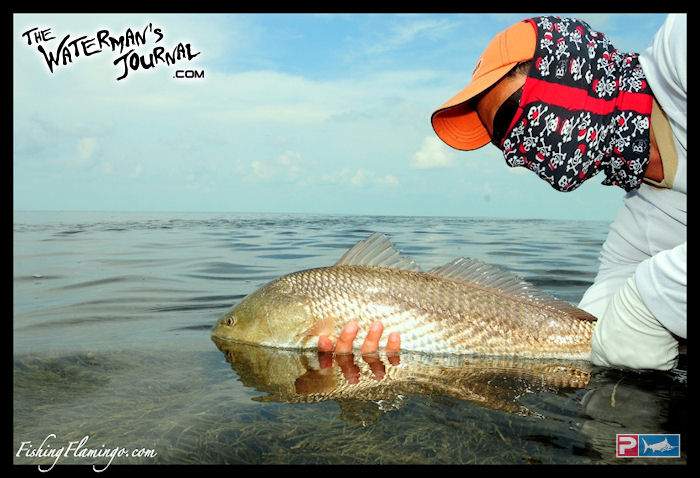 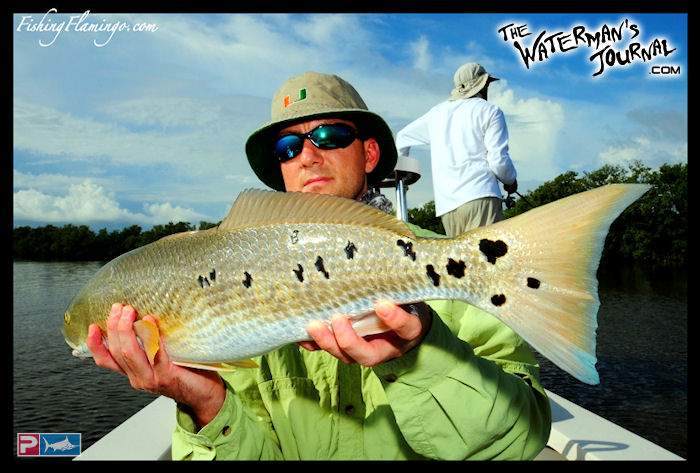 The Meeker Brothers didn't let the weather get them down... Mike's first Redfish was of the Leopard variety 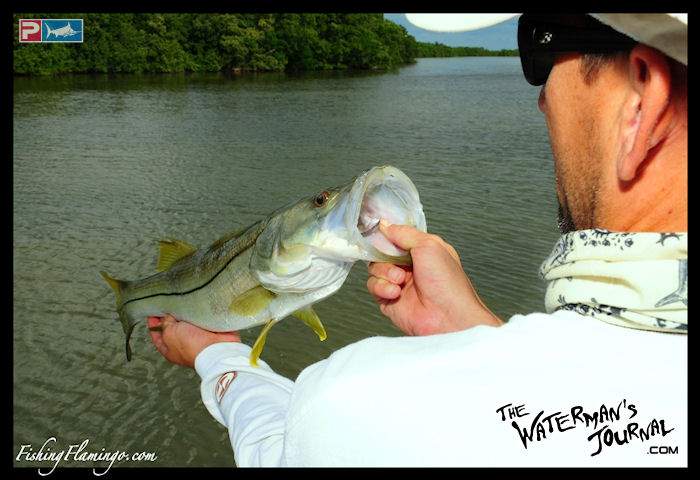 Who knows how many Reds they caught... after they got the hang of it, they were exercising fish left and right. 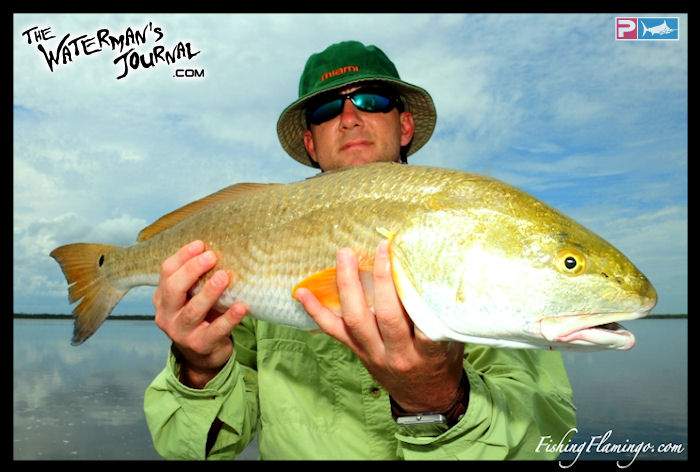 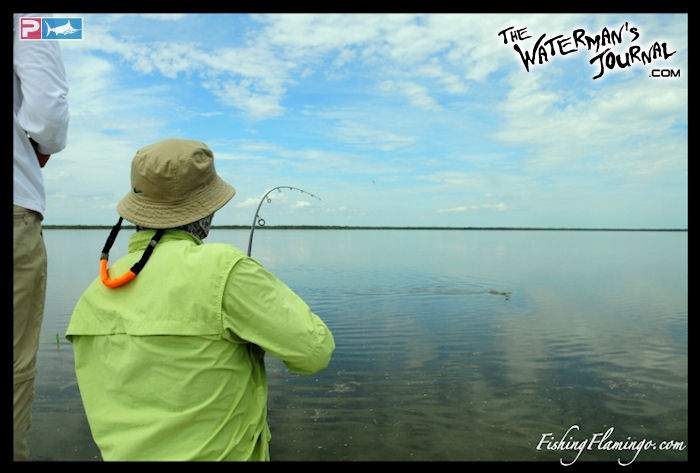 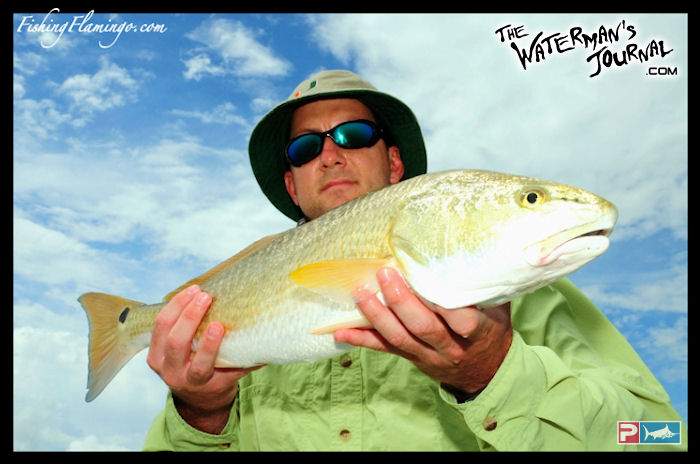 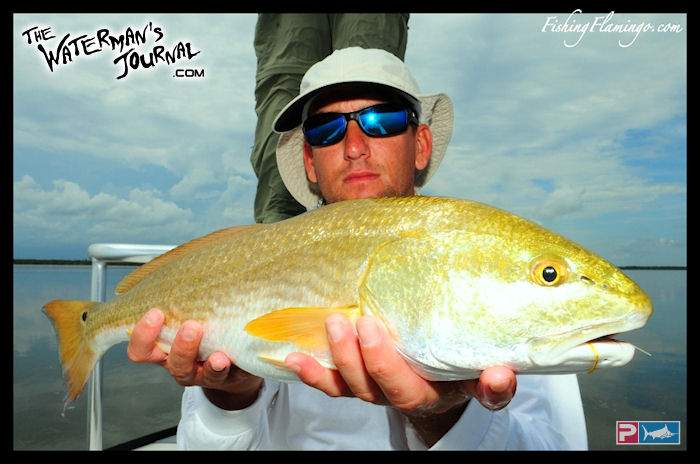 Congrats on another couple Back Country Slams!