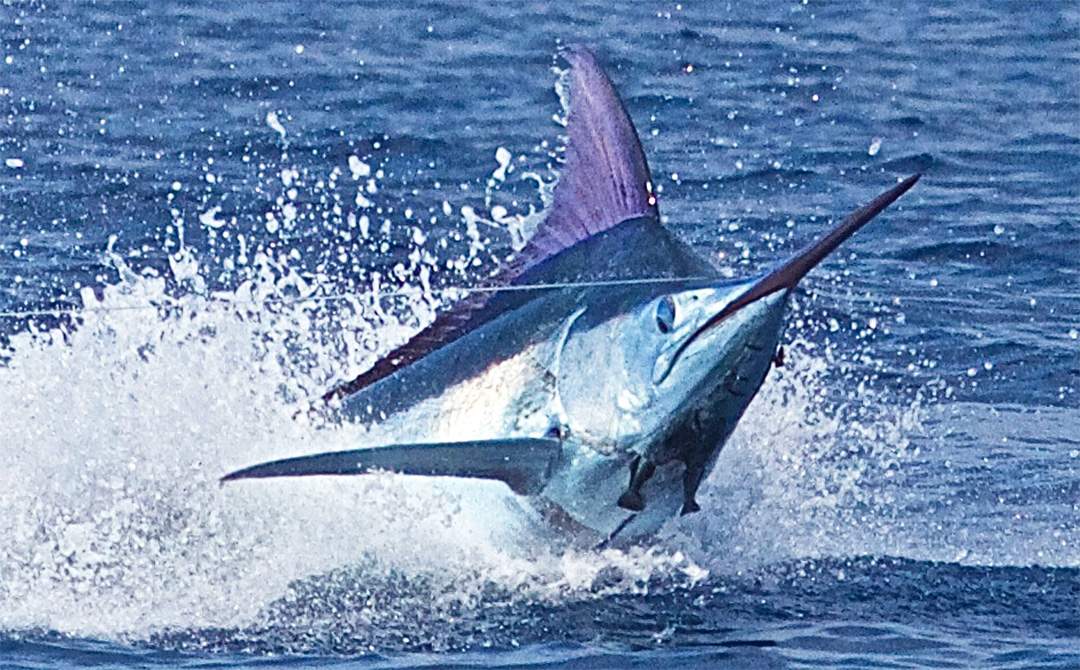 The 2016 summer tournament season is almost underway in Hawaii and the captains and crews in our 50th state are raring to go. The Jurassic Park of the fishing world, Hawaii has a rich fishing history with more than 142 grander blue marlin caught and recorded, and a remarkable 7 granders in 2015 alone. Hawaii’s fishing lore is filled with plenty of true stories from legendary captains about the big ones that got away. In Hawaii’s pelagic zone - something huge can happen at any time on any given day! Just ask Pelagic Pro Team Captain Marlin Parker, Steve Schumacher and Capt. Steve “Stymie” Epstein. Imagine a 23 hour battle with a monster blue marlin – this is what happened in 1990 to these three fishermen involved in an epic Hawaiian fishing battle. This is definitely one of the greatest battles in sportfishing history. It involves a ferocious engagement encompassing a veteran captain, a dedicated angler, gritty crew member and an equally determined monstrous, 1,800-pound plus, blue marlin. This significant event deserves a revisit before the 2016 tournament season begins.

March 31, 1990- Allstate insurance salesman Steve Schumacher always knew he was in good hands whenever he fished with Captain Marlin Parker in Kona, Hawaii. What Schumacher didn’t know when he left Honokohau Harbor with Parker and Steve “Stymie” Epstein onboard the 43’ Allied Marlin Magic was that later in the day he would not leave the fighting chair for an amazing 22 hours fighting a gigantic blue marlin estimated to be possibly bigger than Cornelius Choy’s 1,805 pound blue marlin – the largest ever caught on rod and reel! 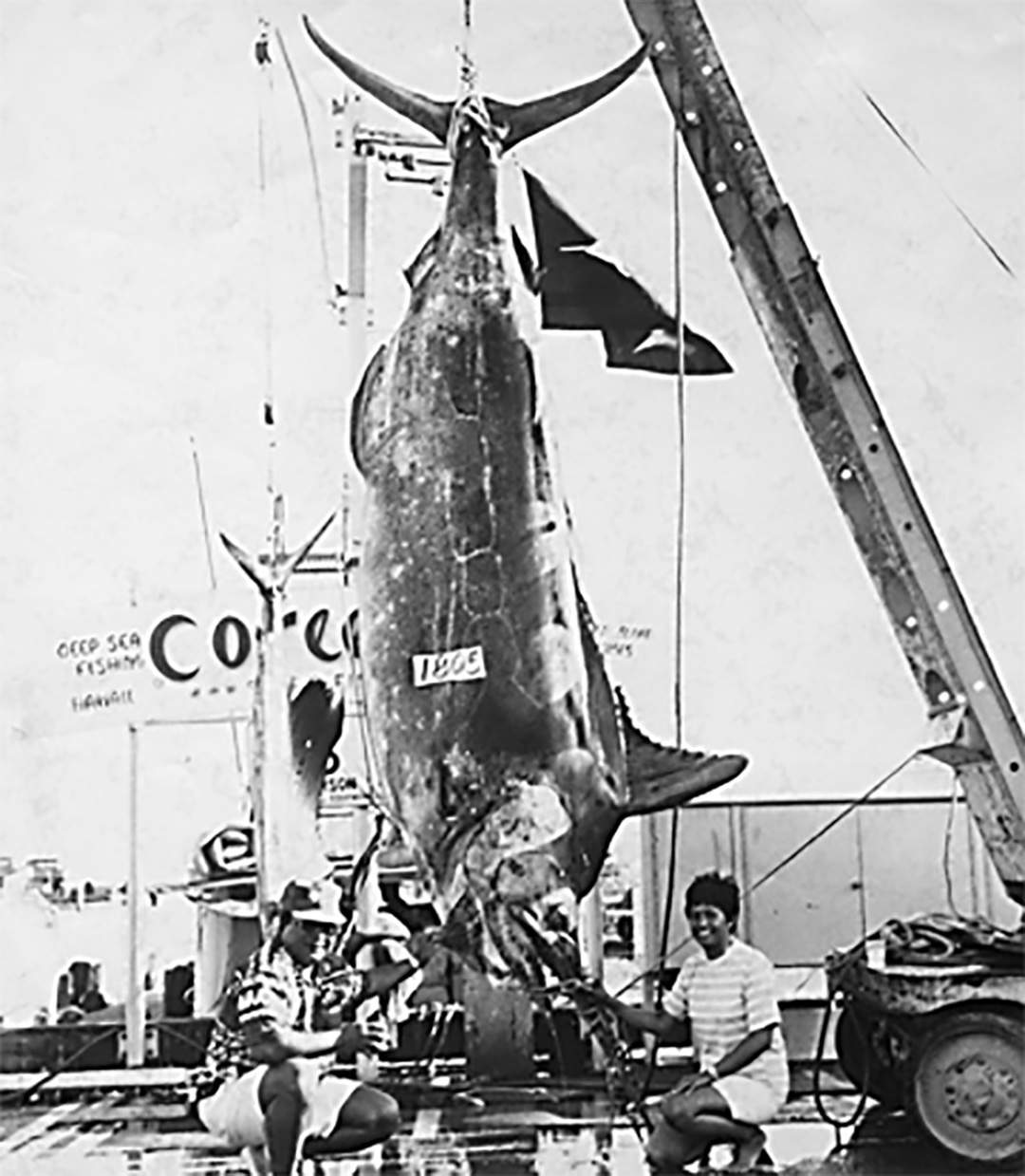 [This 1,805-lb blue marlin is the largest blue marlin ever caught on a rod and reel. It was caught in 1971 with Capt. Cornelius Choy at the helm of the legendary COREENE C. Photo courtesy Hawaii Fishing News]

An experienced angler, Schumacher was always looking for an IGFA world record and typically fished Kona’s calm, cerulean waters 60 days a year on the Marlin Magic. Schumacher had previous experience battling big Hawaiian blues with Parker, and in 1987 he broke off a grander after a 3 ½ hour battle. Over the years he developed a great rapport with the captain and crew and considered them family, excellent team chemistry existed amongst them.

When Parker left the harbor that day, he headed south towards the TT buoy. The initial plan was to overnight and fish hard around the Big Island’s southwestern region. Arriving at TT buoy in the afternoon, the captain was surprised to see so few boats in the vicinity of the buoy. He thought false killer whales might be roaming in the area, a bad sign for fishing. Not seeing any false killers, they caught two aku (skipjack tuna) as live baits and put them out. Suddenly, Parker saw a humongous splash behind the boat and then a gigantic black menacing shadow moving in the deep blue. At first, he thought it was a false killer whale swimming along with a large lit up mahi-mahi along its side. Quickly it registered that wouldn’t make sense, false killers eat mahi, and Parker realized it was a gigantic blue marlin, with its huge pectoral fin looking like a lit up mahi. Within seconds, adrenaline started pumping throughout the team and the Marlin Magic sprung to life.

March 31, 1990 4:30 PM: The monstrous blue went after the short bait but then quickly decided to eat the long bait, a 4-pound aku rigged with an 11/0 hook. Schumacher grasped the single speed 130 H Penn International on a Tycoon Fin-Nor rod with 130 pound test Amilon T line with 400lb Ande mono leader and settled into the chair –the battle had begun. This was the moment Schumacher lived for – a shot at a world record. Little did he realize he would not unbuckle and leave that fighting chair again for 22 hours! 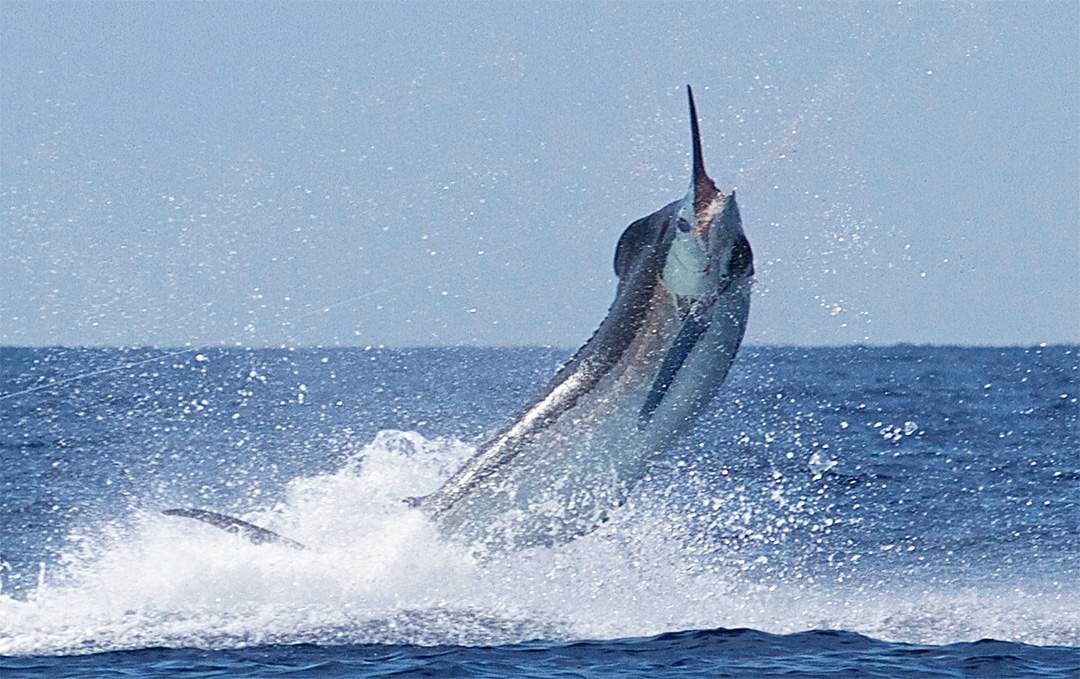 [Disclaimer- there are no photos of the fish involved in the epic 23 hour battle. In this picture is what Marlin Parker calls "a 900ish" pound blue marlin caught onboard the Marlin Magic II. Imagine a fish twice that size! Photo Courtesy of Carol Lynne]

With the magnificent fish on, the three veteran fishermen did what they do best and quickly went to work. After 35 minutes Epstein had a wrap on the leader and Parker flew down from the bridge and grabbed the fly gaff. During the short time lapse period of that transition, the perfect gaff shot was lost and the big, blue brute showed Epstein what it was made of - Epstein had to let it go just as Parker desperately tried to dig the large metal gaff hook into the fish’s flesh. He missed it by 10 inches! From that point on - the war of wills had begun.

For hours, Parker and Schumacher had no problem getting the fish back near the boat. The problem was getting to the leader in compliance with IGFA rules. The gigantic fish would stay straight down off the corner of the boat happily swimming along – they could even see the leader most of the time. Parker tried every trick in the book to plane the fish up, he even did tight circles up to 18 knots around it. He tried blasting the fish with bubbles from the props in an attempt to disorient it and make it move. He even let it drag the 43’ boat hoping it would wear out - nothing worked! Meanwhile, Schumacher had the single speed Penn at sunset the majority of the time at 70- pounds, and used his hands on the spool creating approximately 90- pounds of drag. Instead of water, he drank Mountain Dews for energy thinking it would be over in a couple hours. 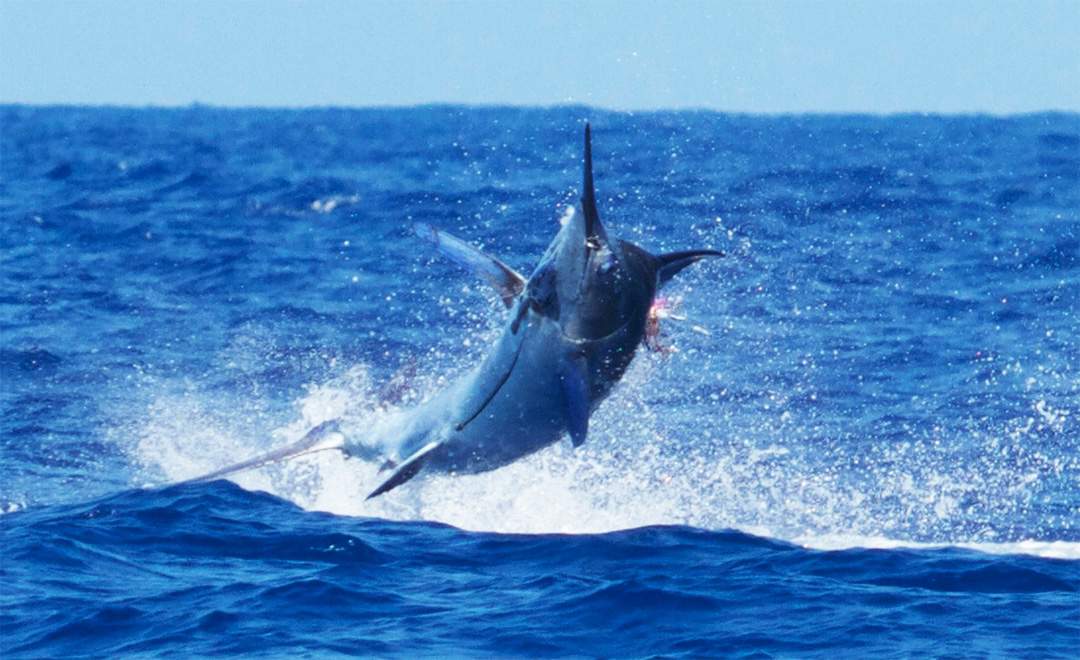 April 1, 1990 6:00 AM: The next morning, Schumacher was still in the chair and his bulky, blue nemesis was still happily swimming alongside the corner of the boat, straight down with the leader in sight. Parker, wary of chafe on the leader, wanted to take a look at the leader so he actually opened the tuna door and stuck his head in the water to take a peek. He was taken aback by what he saw! It was the biggest, fattest blue marlin he had even seen and knew it had world record written all over it. Gratefully, he also saw the leader was in good shape. He was so impressed by the gargantuan fish that he insisted Epstein take a look too. Epstein put on the mask and confirmed the significance of the event.

Knowing the leader was in good shape somewhat revived the exhausted team. Constantly trying to get the angle they needed to get to the leader – with still no luck. At 1:30 in the afternoon, 21 hours into the battle with Schumacher exhausted and still in the chair, the powerful, seemingly highly motivated blue marlin finally went nuts and started screaming line. Parker had been waiting a long time for this moment and went into action – thinking this is it. As the submarine- like, massive fish came towards the back of the boat it went straight down and settled right back into its happy place – where it spent the previous 21 hours. The frustrated, exhausted trio settled back into their old routine of trying everything in the book to instigate their formidable foe to move again. 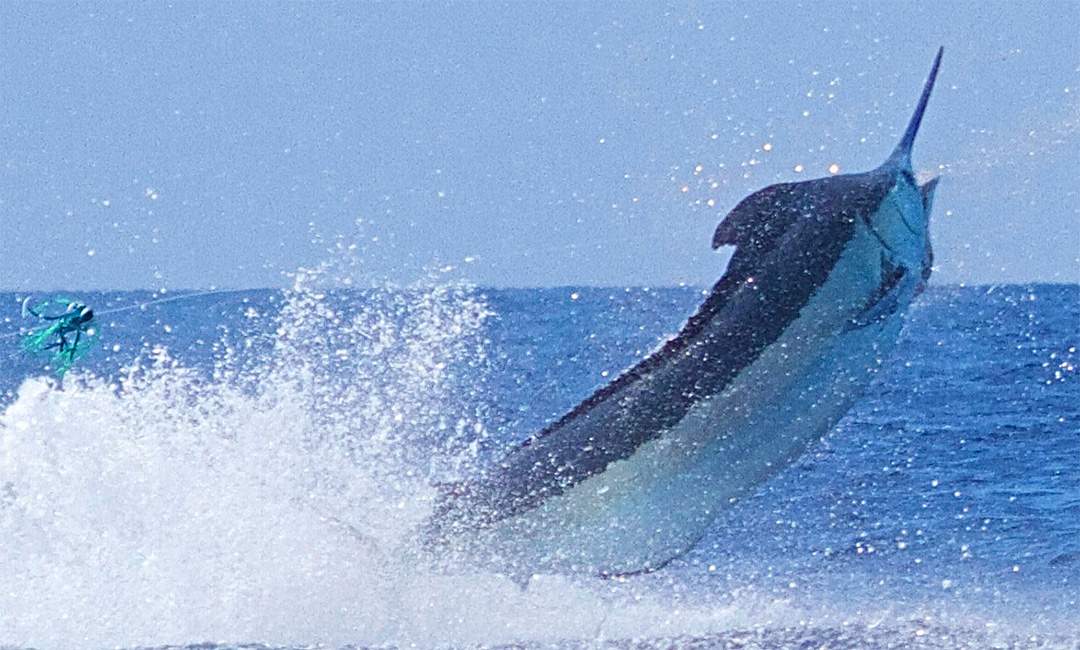 [An estimated 900lb Blue marlin takes to the air to try and shake the hook | PHOTO: Carol Lynne]

April 1, 1990 2:30 PM: 22 hours into the battle, Parker started thinking this is going to be another long night. By now Schumacher had been in the chair for 22 hours, dehydrated, exhausted and his bladder hurting from not only peeing but from sitting in the harness for so long. After 22 hours the two tired men determined that more of the same was too much, and Schumacher’s health was more important than a fish. So they gave up on the IGFA world record rules. Schumacher finally unbuckled after a remarkable 22 hours straight in the chair!

While Schumacher went for his first bathroom break (surprising he didn’t pee in the chair) Parker and Epstein started working on their resilient opponent and it immediately went into a death dive - screaming off 400 yards of line. Hearing the action- a determined Schumacher came out and jumped right back in the chair. Regardless of IGFA rules, an avid fishermen, he desperately wanted to catch this fish. Schumacher buckled back into the harness and got the fish back up to the surface. He thought it was going to be over, regretting getting out of the chair. But as soon as the fish got close to the boat - it peeled off another 500 yards in a final straight down death dive. 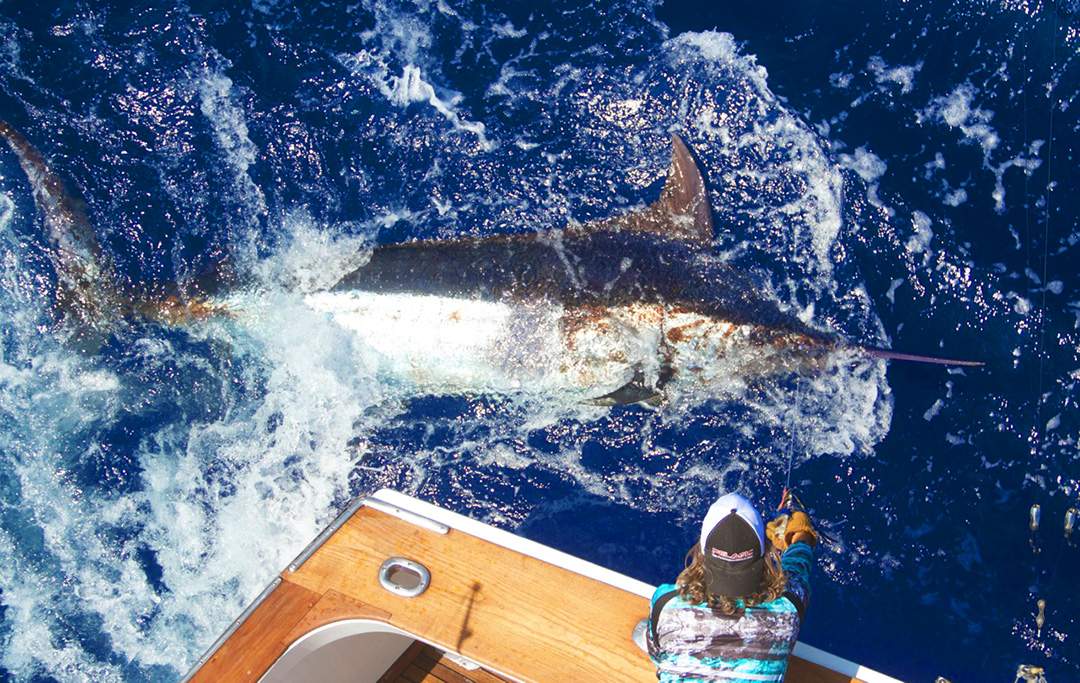 Parker thought for sure he could plane the fish back up as he had down countless times with big blues but it wasn’t happening. He tried to plane the fish with the current, across the current and against the current but no matter what he did – he could not get the fish up. He noticed another boat nearby having the same problem with a fish and realized the current split in opposite directions down deep. The split current made it practically impossible to do anything to get their prized fish up.

April 1, 1990 3:30 PM: 23 hours into the battle, using their hands to pull in the line, in conjunction with winding the reel, they got back 60 yards of super taught line, probably getting all the stretch in the line. And then it happened –the line snapped and it was over.

I asked Parker 26 years later if there was anything in hindsight he might have done differently. He said “my only regret is that I didn’t have a second crew member on board while fishing for a world record. If I could have stayed at the helm we would have had that fish in 35 minutes”. Ironically, Parker lost 2 more granders shortly after his epic marathon but redeemed himself a month or so later with a 1,400-pound beauty that still hangs at the fuel dock at Honokohau Harbor.

Pelagic would like to wish every fisherman/women the best of luck during this summer’s tournament season and hopes anyone who loves blue marlin fishing gets that fish of a lifetime opportunity like Steve Schumacher. Meanwhile, the author knows the easiest way to get a shot at a big blue marlin – is to come fish in Hawaii.