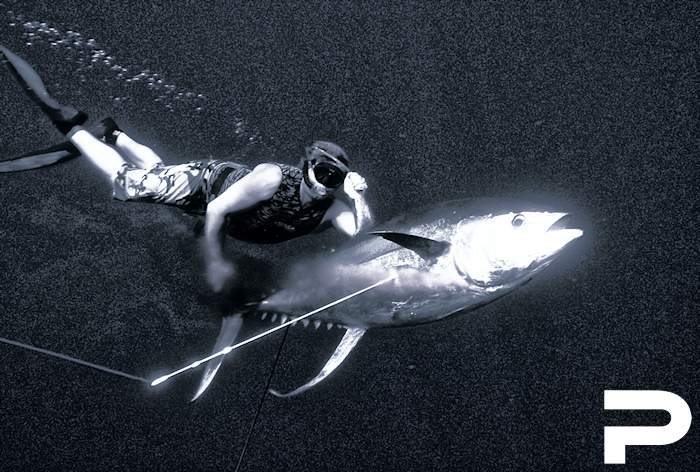 Ascension Island is located in probably the most remote location possible for an island in the Atlantic Ocean. It lies over a thousand miles to the nearest continent, Africa and South America respectively. Explores came across this remote volcanic island in the 16th century, however due to its rugged terrain and dry conditions proved to be not of much use. Over the years, the island hosted various uses throughout the world including an integral land antenna essential for making Global Positioning System navigation possible. But hidden around the island lies perhaps one of the most untapped fisheries in the entire world.

Below: Ascension Island lies in the middle of the Atlantic Ocean ... 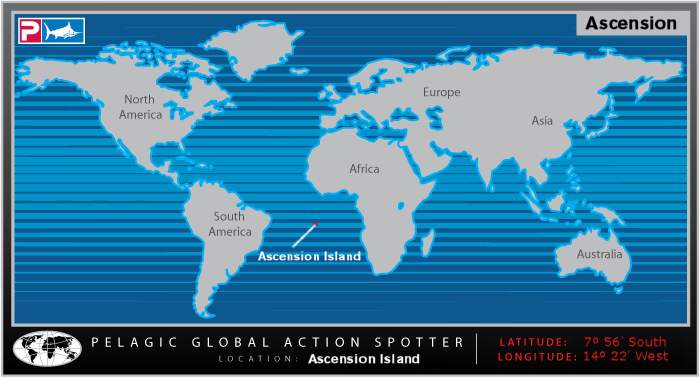 Despite being a very harsh, volcanic island. Life does flourish here. Green Sea Turtles are abundant and lay their eggs up on the sand for much of the year. Many species of Sea Birds also call this island home. With an area of just over 90km², it is not the largest island in the world, but is indeed one of the most remote. Old explorers had introduced both rat, cat, and goats to the islands hundreds of years ago. The true beauty of the island is the water and its marine creatures.

Why Spearfishing in Ascension?

Like many remote islands, Ascension is a volcanic island rising sharply from the depths of the Atlantic. Its highest point on land is nearly 3000' above sea level. Currents collide with the island and bring rich nutrient waters from below to the surface which causes a chain reaction of predation over prey. This is a mecca for large pelagic predators. Marlin, Tuna, Dorado, Mega Wahoo, and Sharks all frequent these waters for a free meal.

The Waterman's Journal is very pleased to have Colin Chester and his buddies share with us some incredible photos from their great adventure.

"Last trip saw us get some big tuna up to 251 lbs on spear. We saw some buses though with some i recon going 350, 400lbs bloody difficult to get a spear into...thats why they so big...very clever! We are still seeing loads of marlin every trip but they always come in after you have just shot a tuna or a wahoo, as you know they have no problem swollowing a 50 lbs tuna and they do try! We had a few very nice wahoo of 42, 44 and 46 KG's this year, plenty sharks eating fish...makes things interesting."

Below: A large Wahoo is taken by way of Spear off Ascension Island ! 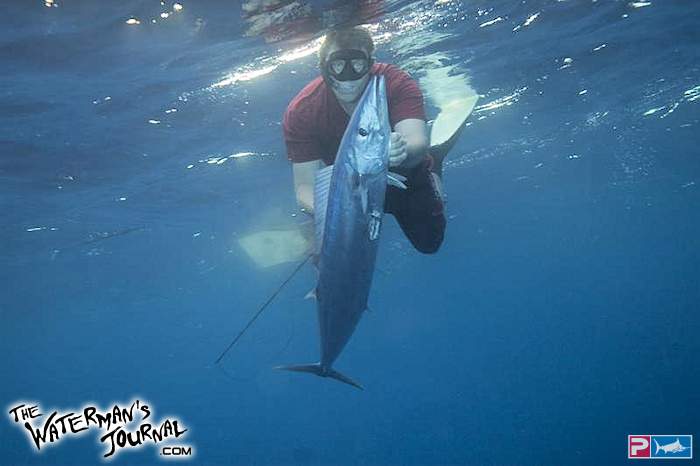 The waters around Ascension can be the stomping ground for Tuna. For Colin and crew this is the ultimate chance for spectacular freediving and spearfishing for a chance at some of the largest Yellowfin Tuna that currently are swimming around in the Atlantic. These guys are after the monsters, even if it is just to get a glimpse of these majestic predators .

Below: A solid Yellowfin is shot and brought aboard. 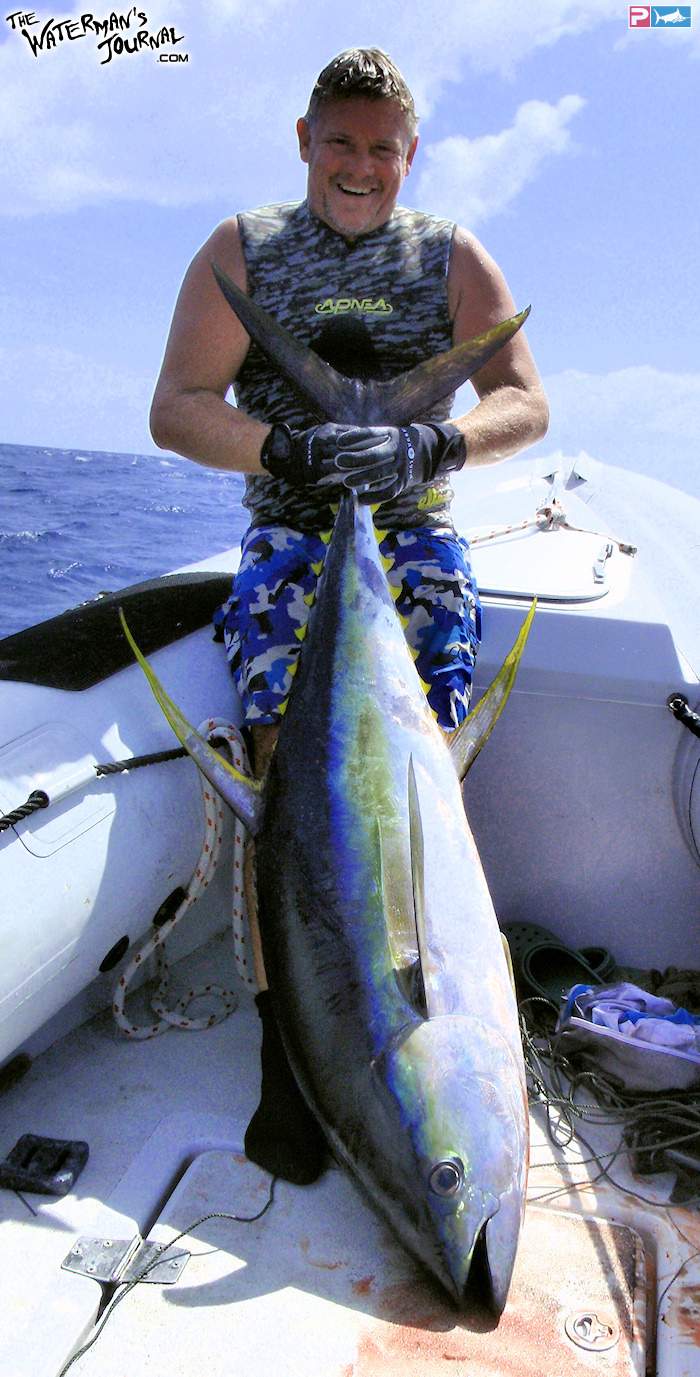 Ascension is well known if its Grander Marlin . There is a large enough supply of food for these beast to sustain a good population of billfish in excess of 1000lbs. In addition to some of the largest Marlin in the Atlantic, these waters also contain some of the largest Tuna, mainly giant Yellow in excess of 300, perhaps 400lbs. True magnificent beast and the ultimate predator that does one thing only... swim fast, and eat fast... and repeat the cycle.

Below: A massive Yellowfin is shot and subdued 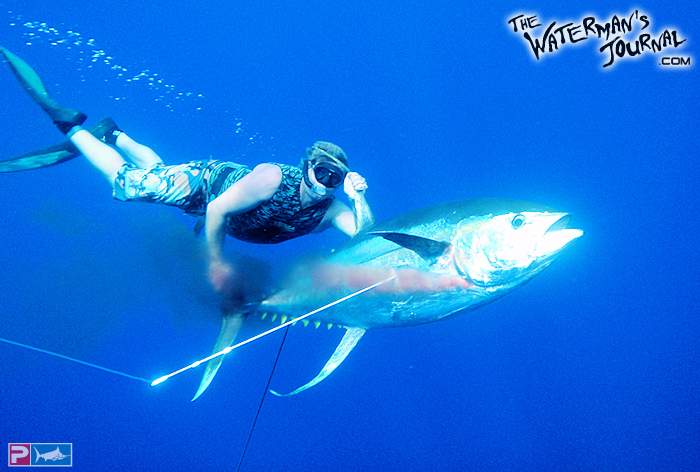 Below: Swimming the monster to the surface ... 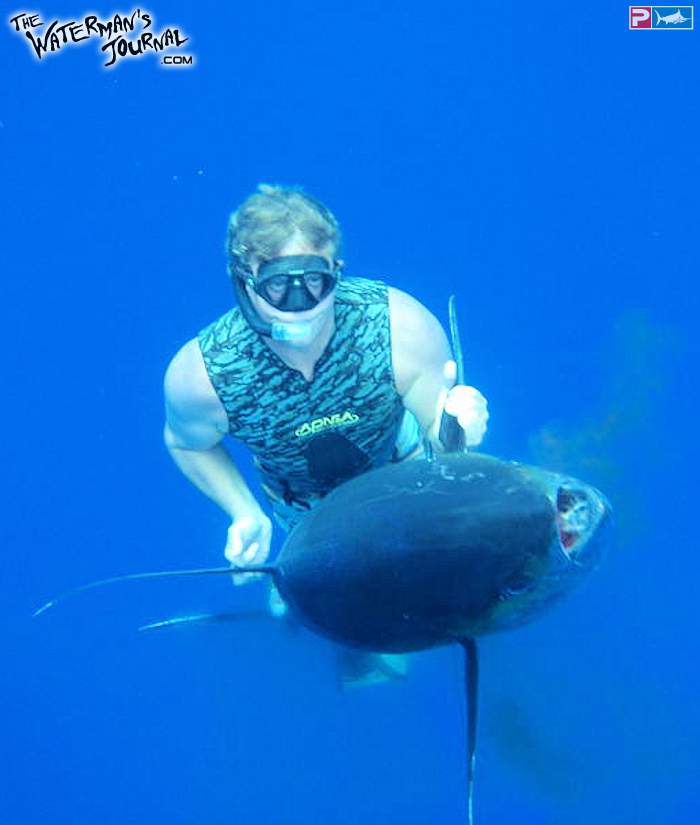 Below: What an awesome photo... 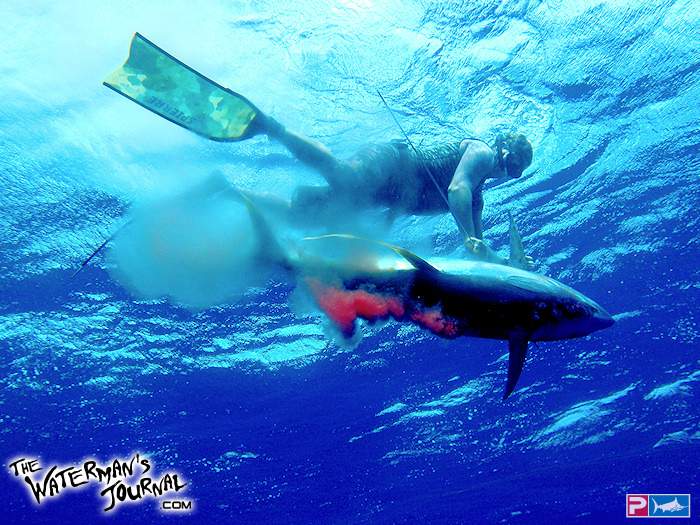 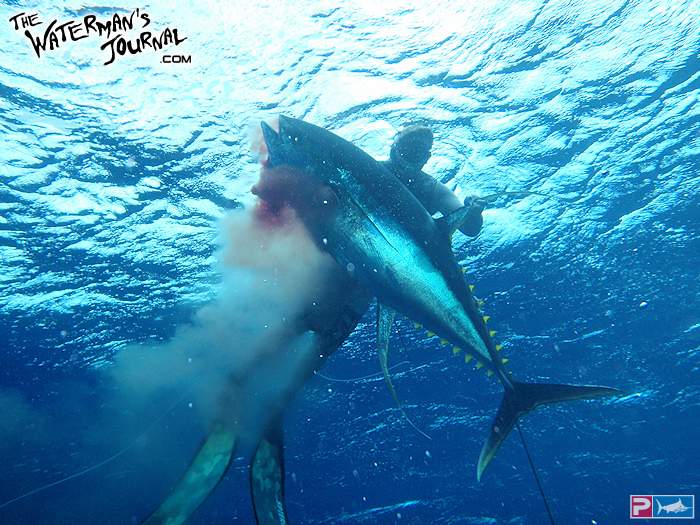 Below: One last killer underwater photo! 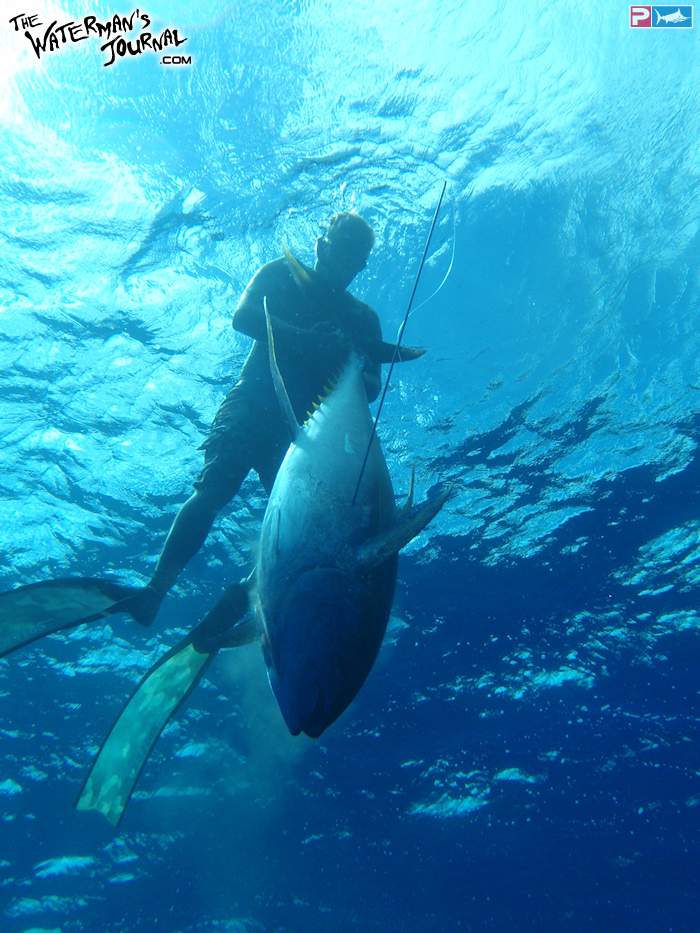 Below: The true size of the beast is realized above the surface ! 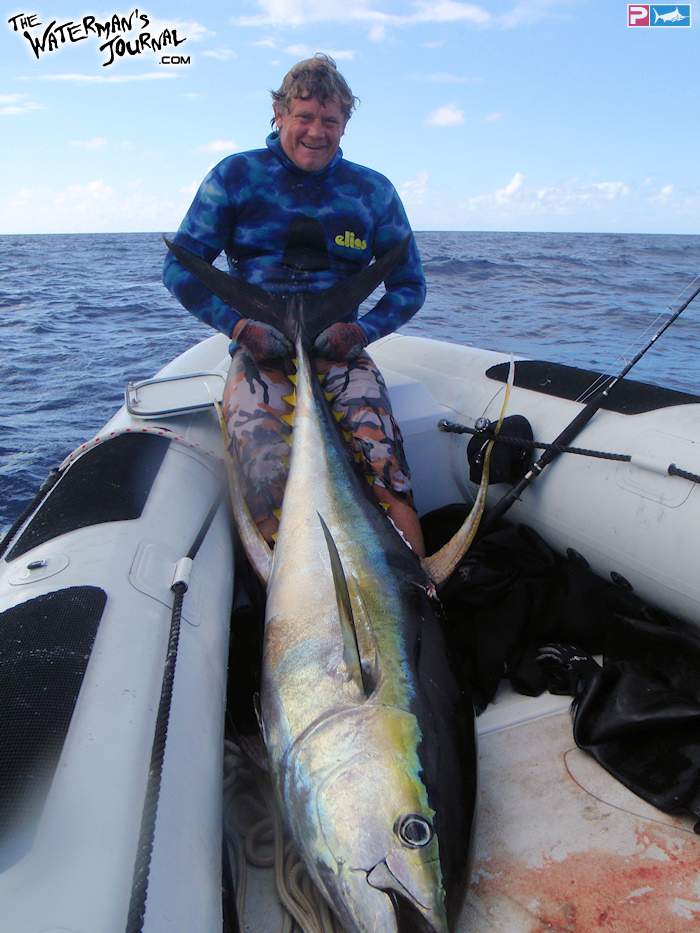 Below: Back at the dock, Colin shows us a picture of the epic Tuna! 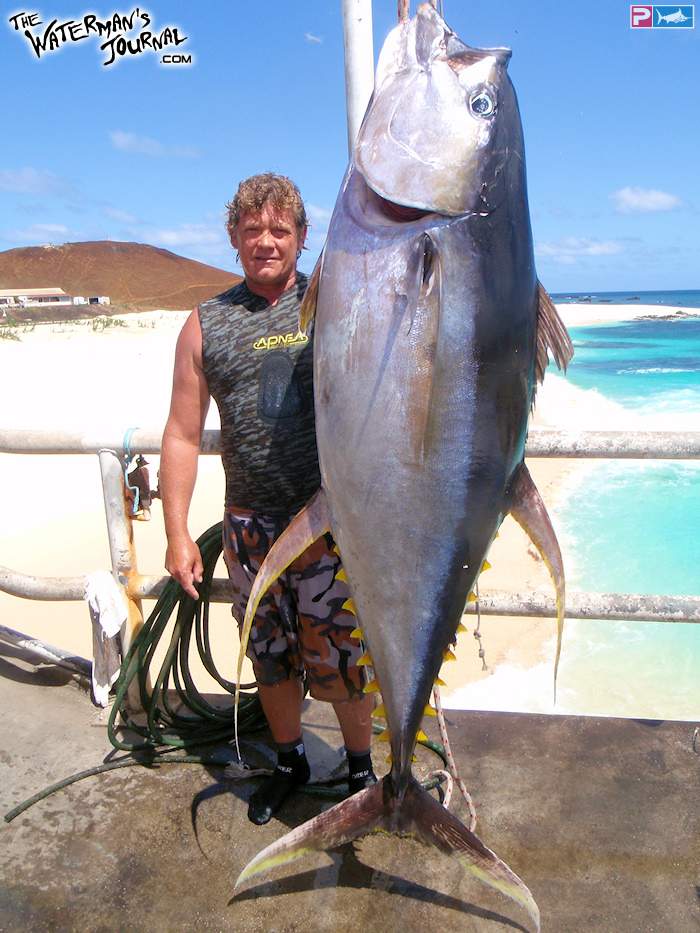 Below: Talk about a mega Wahoo ! 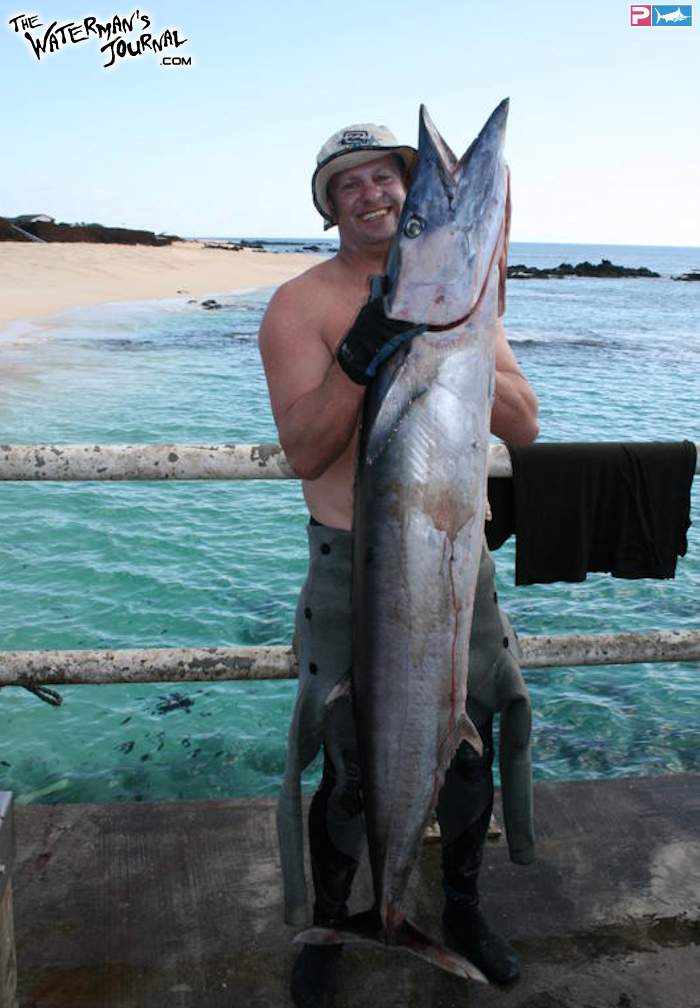 Below: Some killer Pelagic Action ! 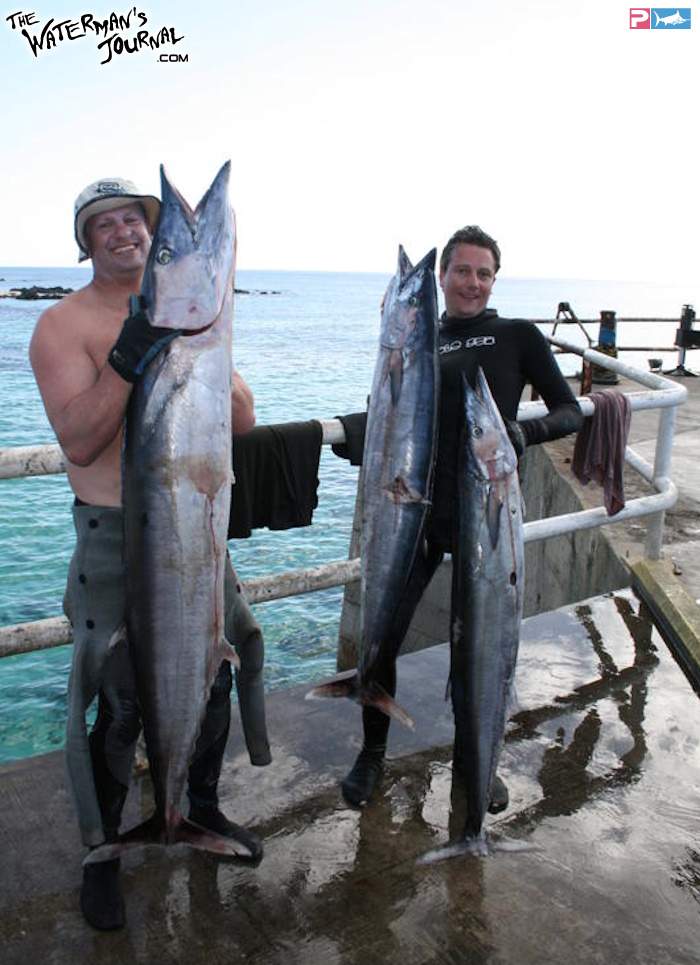 The Waterman's Journal would like to thank Colin and his crew for sharing their remarkable journey with us.