A Season to Remember: Giant Black Marlin on the Great Barrier Reef 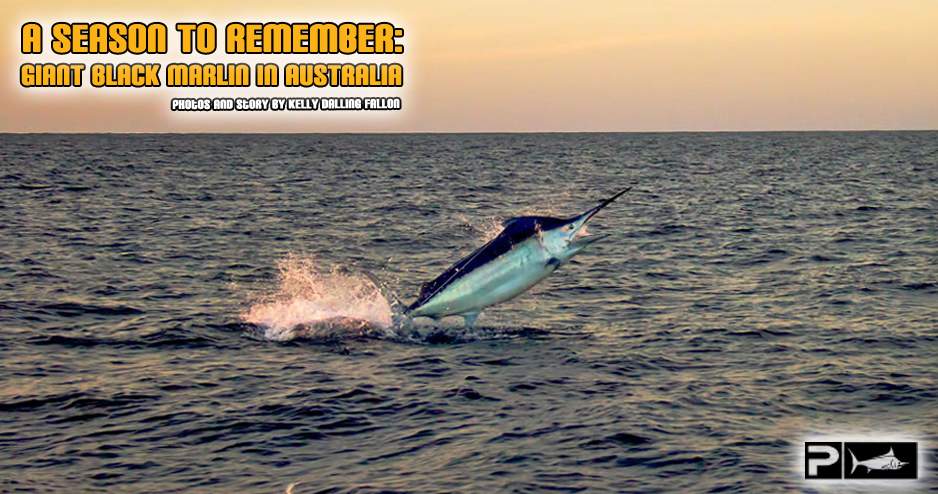 A Season to Remember: Giant Black Marlin in Australia
Photos and Story by Kelly Dalling Fallon

The annual Cairns Giant Black Marlin Season wrapped up in December with the 2013 season a standout for many for the number of big fish that were encountered this year.

BELOW : Jack Graham on the leader of an aerial "mid-ranger". 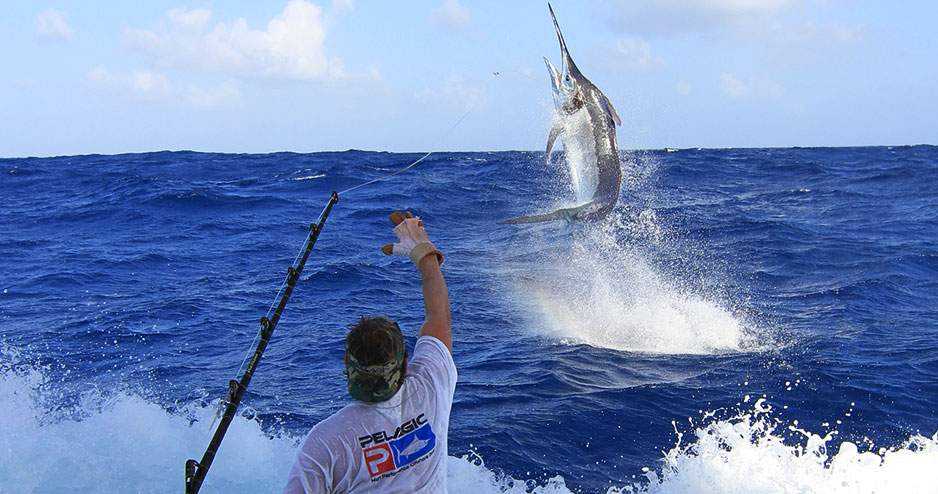 The season begins annually in late September when the waters off Cairns - along a 100 mile stretch of reef known as the Ribbon Reefs that runs parallel to the coast north to Lizard Island – start to warm coming off the Australian spring season and leading into summer. With crewmen Braden Byrne and Jack Graham once again joining Pelagic Pro Team Captain Luke Fallon on board KEKOA , we started our season on Cairns’ famous Linden Bank grounds which always produces good fish both early and late in the season, as they are attracted to the area by the sheer amount of bait – huge schools of skipjack and small yellowfin tuna – that hold over the underwater contours.

BELOW : Nothing beats big fish in calm weather! 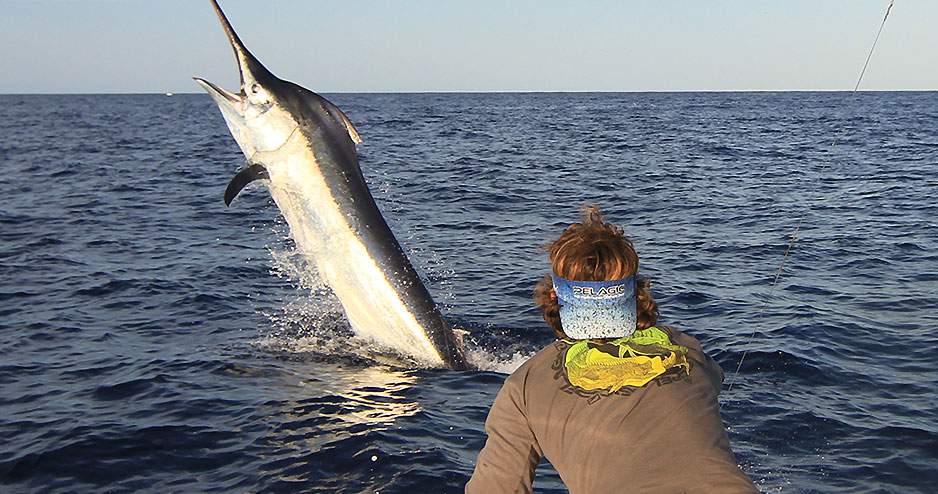 Moving north to Lizard Island (for the Lizard Island Black Marlin Classic) and the Ribbon Reefs, it was here that one of the hottest bites of the season unfolded in late October. On KEKOA , one particular trip at this time, with guests from Washington State, was no doubt our highlight of the season.

BELOW : Another big fish on the late afternoon bite. 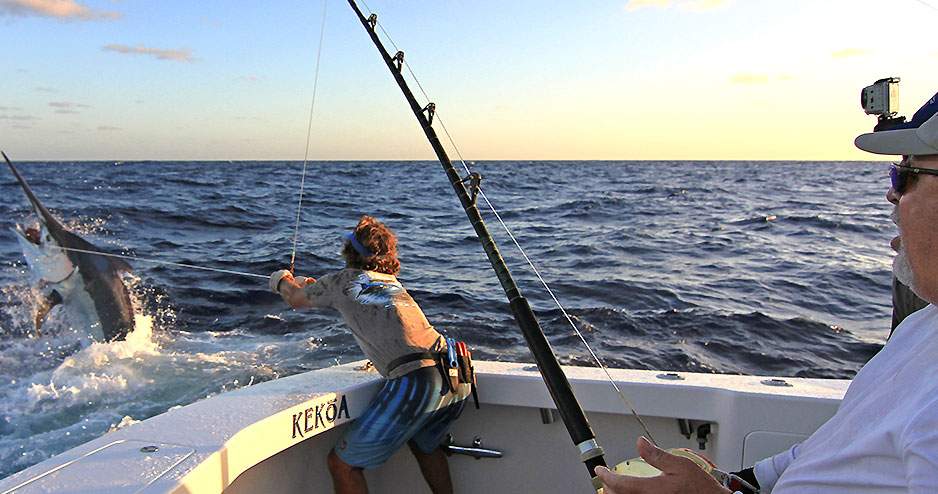 It started off extremely well, with six black marlin in the first three days of fishing – 250lbs, 350lbs, 400lbs, 500lbs, 550lbs and 800lbs. And it just so happened that all the stars aligned that week and in addition to the great fishing we enjoyed some of the best morning swims and spearfishing sessions of the year.

BELOW : Big GTs too – the fishing in the mornings was red hot. 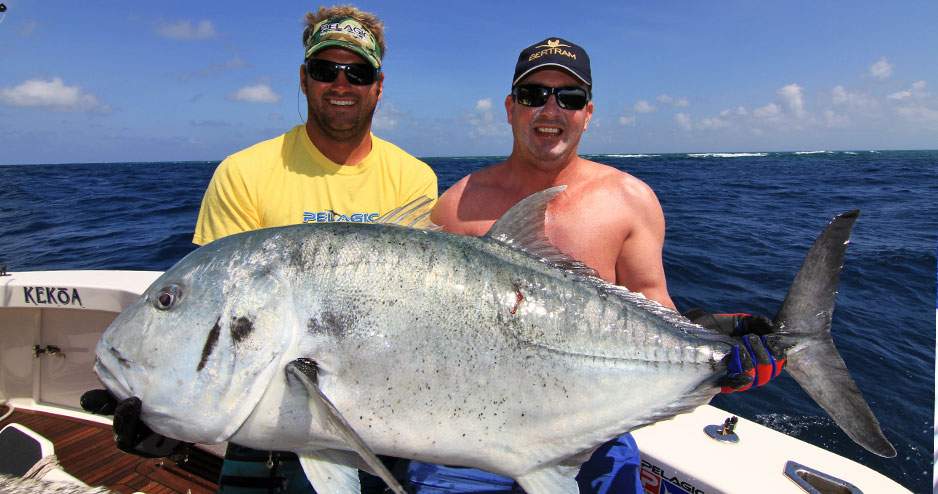 As the week progressed, the tide (and the marlin bite) got later and later in the day leading to some tense moments as we approached lines in without a bite - but the fish never disappointed us. On one particularly day, we only saw three fish for the day, but each one Capt. Luke estimated at over 800lbs! On our final day of fishing the late bite, our first hit came at just after 5pm when there was a big explosion on the stinger bait which was seen by everyone on board – with a fish of about 900lbs released thirty minutes later after an intense battle which saw the fish give us plenty of airtime. 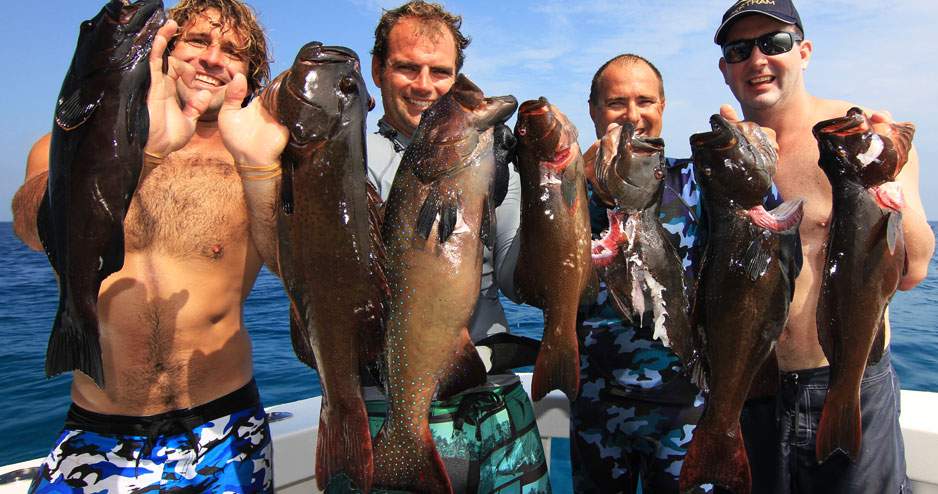 Making one last run over the spot on the way into the anchorage with the sun already beginning its descent we were very happy with the day. But it wasn’t over yet - another big fish about 800lbs piled on and stayed on the surface and did some great jumps in the fading light.

BELOW : Photo of KEKOA taken from the water on one of the morning swims in late October. As you can see, the water clarity was out of this world! 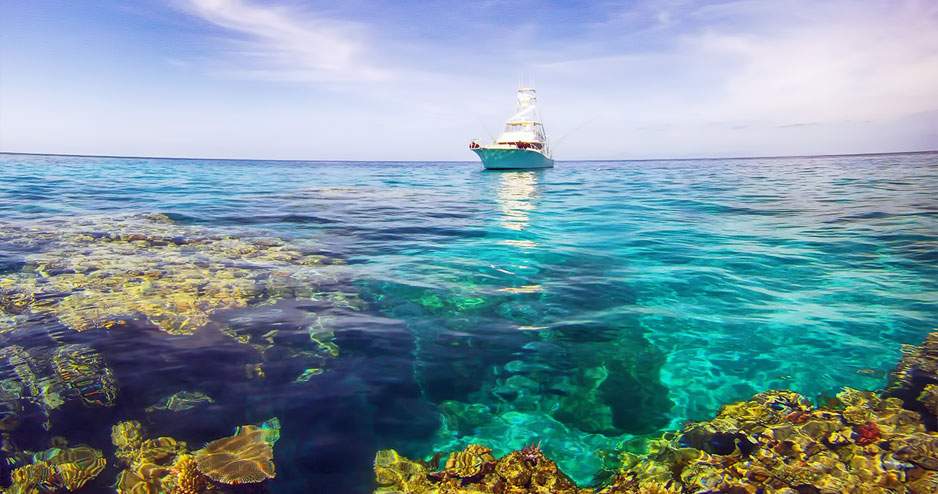 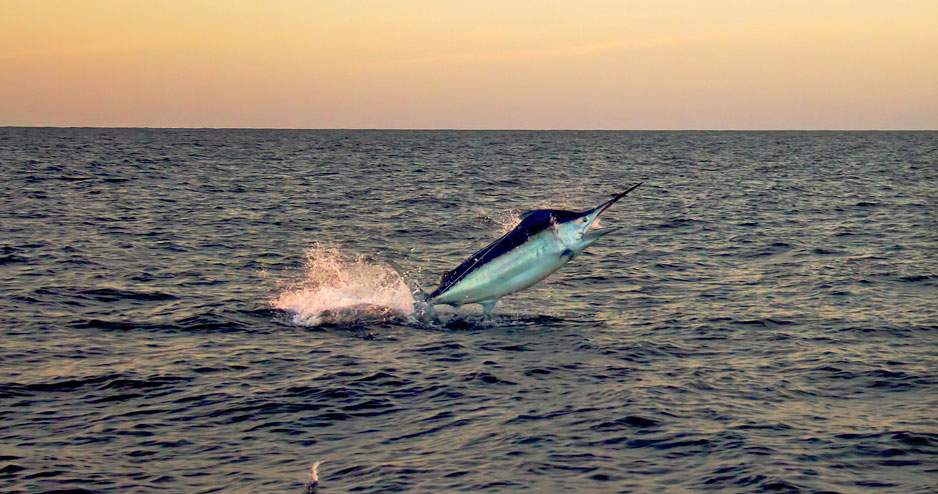 In November, we moved back to the south closer to Cairns; and, although the big yellowfin tuna aggregation didn’t occur this year (usually late in the season we can expect big eye and yellowfin tuna in the 50 to 150lb class to school up out wide of the reef), the warmer water did bring a run of larger than average blue marlin out wide which kept us entertained as the water also glassed off.

BELOW : Jack on the wire! 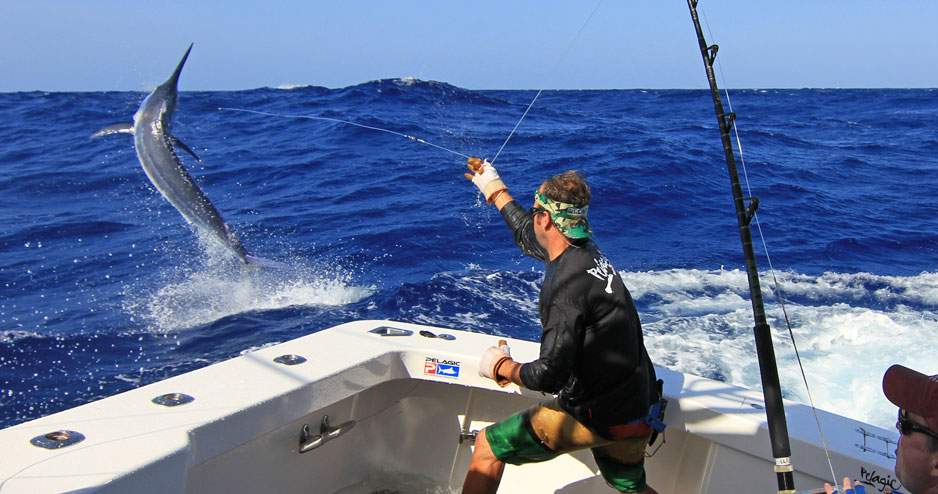 Another fish that sticks in the memory was also our last fish of the season as we wrapped up on a big fish high. We had already released one smaller black that day when two more small to mid-range fish popped up in the spread. While Jack prepared to feed the pitch bait back to one off the right teaser, another big fish came out of nowhere and climbed onto the big bait on the left. This one gave us a tough battle for close to an hour as it weaved through the tuna schools and stayed just sub-surface for most of the fight (and had other fish swimming with it for most of the fight as well.) Seeing our chance for a healthy release after having her on the leader already three times, she was let go with plenty of fuel left in her tank.

BELOW : Another late biter. 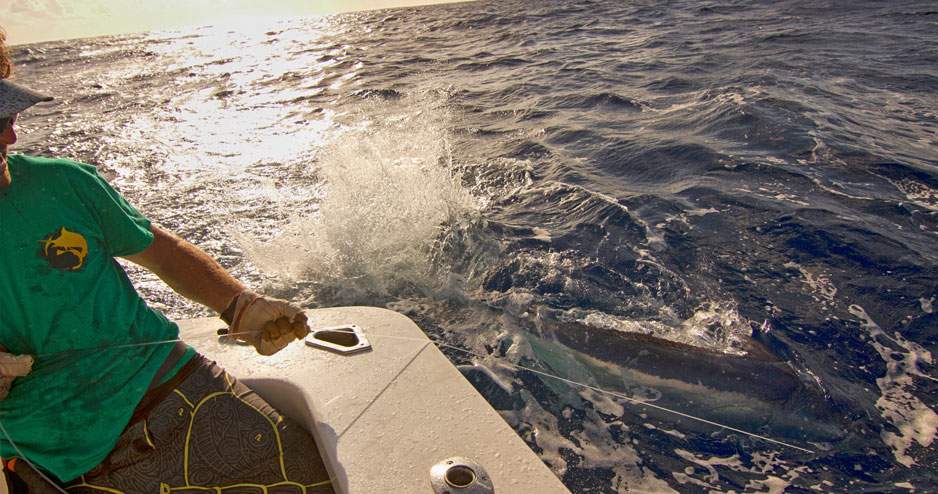 Capt. Luke Fallon has been fishing the Great Barrier Reef for well over 25-years and has weighed many big fish in his time – the biggest 1298lbs – although the vast majority of fish are now released. He is considered one of the more conservative in his fish estimates and is not one to give away ‘granders’ unless the fish are well and truly over the mark. Even this being the case, Capt. Luke was blown away at the run of big fish on the reef this year – unlike anything he’s seen since the early 2000’s!

BELOW : Braden with a big fish on the leader. 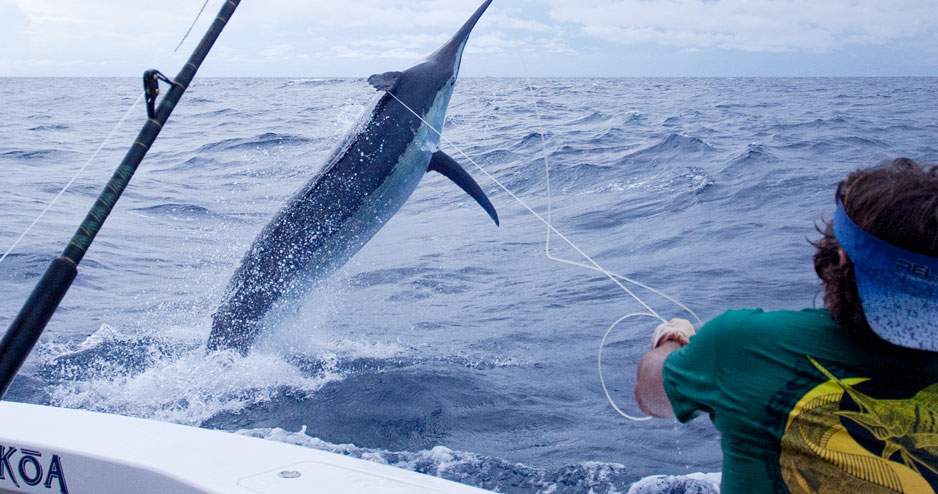 Make sure to visit KEKOA online at: www.kekoa.com.au